By Jennifer Contreras, Matt Paulson on March 21, 2003 in Sports, Volleyball 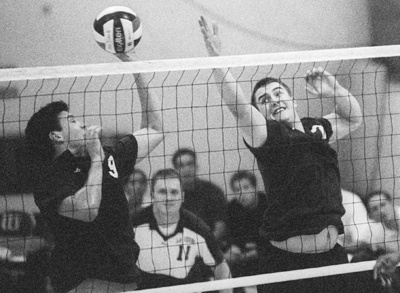 Sophomore Dwayne Wibeto (No. 9) and freshman Ben Paine (No. 2) block a ball set by Newman University in Friday’s match in the Supertents. La Verne took the second game of the four-game match, but ultimately lost to Newman, 3-1. / photo by Jennifer Contreras

Game four: the University of La Verne men’s volleyball team is at game point, 29-27. After losing two of the first games, a loss in this game will send the Leopards away with a defeat.

Associate head coach Jack Coberly subbed in senior libero Shane Haldeman to serve. Haldeman stepped to the service line, floated his serve over the net, past all six Cardinal Stritch Wolves and landed it on the back line for an ace and game point.

Because of Haldeman’s ace, ULV and the Wolves were to play a game five.

“Shane’s got a good little floater,” associate head coach Morgan Coberly said. “He keeps it in.”

ULV started off the night rolling to a win in the first game, 30-25.

In the second and third games, the Wolves outplayed ULV, winning 30-24 and 30-25, to steal the match’s momentum going into the fourth.

But ULV battled back after freshman setter Adam Hilton and freshman middle blocker Ben Paine entered the match at the beginning of the fourth game. 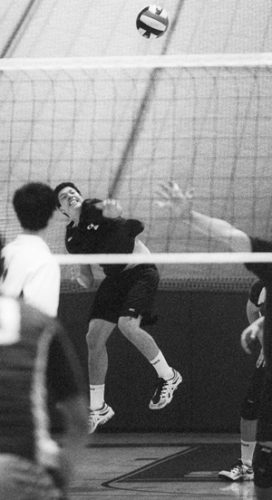 In the second game of the match Friday night, sophomore Dwayne Wibeto serves the ball to Newman University. The final score of the match was 3-1, sending Newman back to Kansas with the victory. / photo by Jennifer Contreras

Led by Haldeman’s ace to win the fourth and a big defensive night at the net – ULV had a team total of 14 blocks to the Wolves’ 7.5-the Leopards regained the momentum to win the match in five games.

Even though it was a big win, the Leopards’ offensive effort lacked energy.

As a team, the eight Leopards who attempted kills hit for a total percentage of .145, with only three Leopards hitting in positive numbers.

The biggest ULV faced was 6-foot-6-inch Cardinal Stritch outside hitter Adam Stemple. On his own, Stemple accumulated 27 kills on 55 attempts for a percentage of .327.

This kill total is higher than the sum of ULV’s two highest individual totals on the night: senior outside Josh Miller (16) and senior middle blocker Dave Engle (10).

Miller, from Santa Ana, was ULV’s most solid performer in the match, boasting a match-high hitting percentage of .462. ULV rode this consistency at the end of the fifth game, as Miller pounded three of his 16 kills in the final seven points of the match.

Morgan Coberly attributes Miller’s success to his aggressiveness in the match.

“When he swings hard, he plays great,” Morgan Coberly said.

Overall, the match elapsed one hour and 45 minutes off the clock, exhausting both sides in ULV’s second five-game match in its last three matches.

“I feel like I just gave birth,” Morgan Coberly said.

The main highlight on the evening was another two consecutive aces from sophomore opposite Dwayne Wibeto.

The Leopards leave today for the University of California, Santa Cruz to face the Banana Slugs, along with New York University and the State University of New York, New Paltz in a two-day tournament.