By Brian Ortega, Jennifer Contreras on March 14, 2003 in Softball, Sports 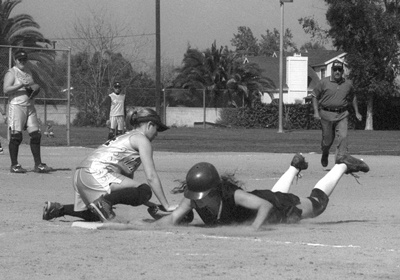 After much deliberation between coaches and umpires, senior shortstop Gina Meza was declared safe at first base. Sophomore Courtney Lum of Whittier defended first base in both games of the doubleheader in La Verne Saturday. La Verne took both games against Whittier, 9-1 and 5-1, after trouncing the Poets 15-0 in Friday’s game. ULV is 10-6 on the season. / photo by Jennifer Contreras

This past week, the University of La Verne was able to earn a win over Rensselaer Polytechnic from New York, 8-0, on March 9, along with wins over Albion College 8-2, and Texas Lutheran 5-1, on March 11, helping to establish ULV as a force to be reckoned with in the Sun West Tournament.

The only loss the Leopards met thus far in the tournament was a loss to Central College from Iowa on March 9.

The Sun West Tournament is an on-going, month long tournament, which displays some of the best teams from across the nation in softball. The tournament is being held at Chapman University.

Coming off a shutout win of 15-0 against the Poets on March 7, the Leopards were pumped and ready for more action Saturday.

In the first game, the Leopards were able to capitalize early in the game as they brought in Libby Ramos on a sacrifice hit from Gina Meza.

In the fourth inning, however, the Poets were able to sneak one past ULV on an overthrow to third base.

ULV answered back with a double RBI off Amber Guerra.

The Leopards then capitalized off another opportunity by Brandi Thompson, as she was able to bring in a run off a single.

But it was in the 6th inning that the Leopards came out strongest on offense. With the bases loaded, Gina Meza hit a line drive past third base that brought in two runs.

2001 SCIAC MVP Sue Whitcher continued the rally, hitting a double that brought in a run.

The Leopards then sealed the game by stealing home and having the eight-run mercy rule take effect.

The final score for the first game was 9-1.

In the second game of the doubleheader, Gina Meza brought in a runner off a line drive past second base.

The Poets were not able to post a score until the third inning.

But in the fourth inning, Meza started the rally with a hard double; this was followed by a single from Whitcher that brought in Meza for the run.

Jessica DeGiacomo finished off the rally by hitting a single that brought in two runs for ULV.

ULV will take on Cal Lutheran at 3 p.m. today at Wheeler Park, followed by a 12 p.m. start tomorrow at Cal Lutheran.