By Monique Jimenez, Sylvia Castellanos on March 14, 2003 in LV Life 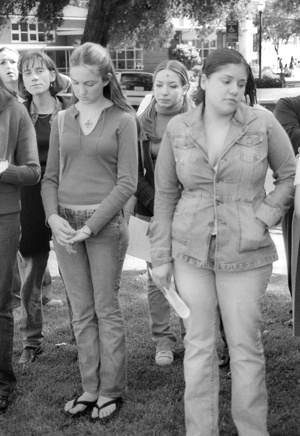 Ash Wednesday marks the beginning of Lent in the Catholic religion.

There were three services throughout the day with the largest attendance at the noon service.

Services were officiated by a Protestant minister and a Catholic nun.

Since there is no longer a Catholic minister at ULV, Campus Minister Debbie Roberts distributed ashes throughout the day.

“Campus Ministry tries to administer to what the campus needs in nourishment and spiritual guidance, and ushering in of the Lenten season is a very important celebration,” Roberts said.

It is an observance during which Christians are invited to the altar to receive ashes in the shape of a cross on their foreheads.

When administering the ashes, the distributor says: “Remember that you are dust, and unto dust you shall return,” from Genesis 3:19.

The ashes used on Ash Wednesday come from the burned palm leaves used in the previous year’s celebration of Palm Sunday.

The burned palms are then blessed by a priest and distributed on Ash Wednesday.

Ashes and dust are an ancient symbol of penance. They have been used interchangeably to stress not only penance but also the inevitability of physical death.

On the Day of Ashes, many Catholics are seen with a cross of ashes on their forehead.

But when the tradition began, the penitents were supposed to wipe away the ashes on their forehead when they left the church.

The mark of the ashes was to be kept in their hearts instead.

“In the world today, any observance of peace and self awareness helps in the spiritual healing of people who are unsure and in need of guidance and solitude,” said senior Gema Santiago.

The service symbolized a way to prepare the community to find inner peace amidst the impending war with Iraq.

“I have studied abroad, as well as traveled to many other countries, and the events that are occurring today are very negative,” Santiago said.

“In taking some time on a day like Ash Wednesday, it helps me in my inner peace and reflectance.” Santiago said.

One of the services had a peaceful mood, which was perfect for the occasion.

The service began as participants proceeded into the chapel while music played faintly in the background.

Everyone was welcomed to the service, and it started with an opening prayer.

Then a student participant read the first reading.

More music was played, and the community was asked to respond to short prayers.

“Forty percent of the campus is Catholic,” Roberts said. “It is important to observe Ash Wednesday since it is one of the biggest Campus Ministry celebrations.”

Everyone in the chapel stood to receive ashes.

The service ended with the closing prayer, allowing participants to reflect on the season of Lent.

The Lenton season lasts for the 40 days leading to Easter Sunday.

These 40 days are representative of the 40 days Jesus fasted in the desert.

There are actually 46 days between Ash Wednesday and Easter, but the six Sundays that occur in this period are not considered part of Lent.