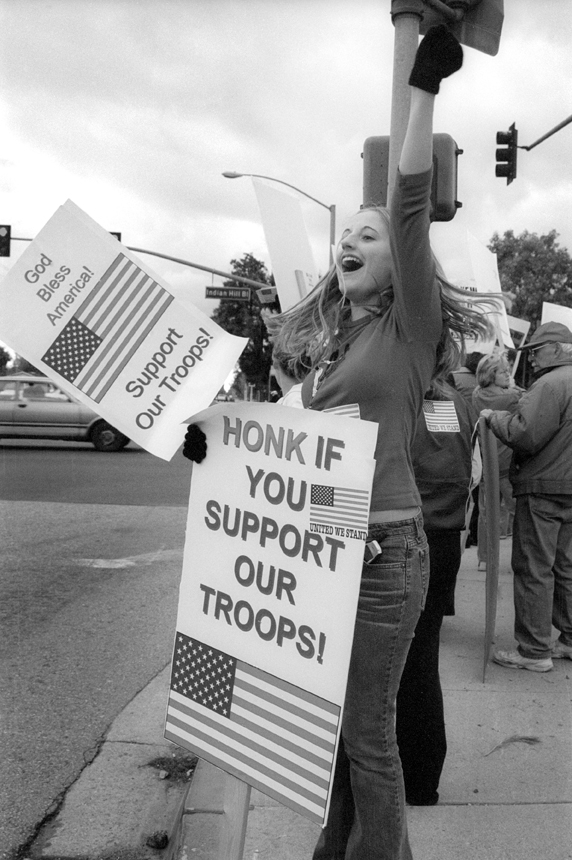 Fifteen year-old Samantha Humphries of Claremont High School says, “I feel that it is important to let the military know that we support them so they feel they have a reason to do this.” She and a group of friends were enthusiastic about their support for U.S. troops abroad and their rallying cheers solicited honks and shouts as they circled the intersection proudly. / photo by Jennifer Contreras

Monday, March 21, 2003, marked a historical moment when President George W. Bush publicly presented an ultimatum to Iraqi leader Saddam Hussein that asked him to step down from power within 48 hours, or prepare for war with the United States and Britain.

As timers popped up on television screens and in the minds of people all over the world, the countdown solicited reactions that have led to the divided state the world now finds itself in.

When the timer was up, “Operation Iraqi Freedom” began, and after its fifth week, the citizens of the United States are at war with each other over opinions and ideals.

Advocates of a peaceful resolution between the U.S. and Iraq are relentless in their cause. Protests around the world have put faces to the voices and concerns that adorn signs made out of sticks and cardboard. The international peace movement, as some call it, has been a presence one cannot ignore. Every day the headlines read of some new way that people are taking a stand against the war. And in the local communities, the movement has failed to cease.

It is the constant presence of peace slogans and street corner rallies that has sparked another movement. The movement that says “We support our President! We support this war!” American flags are waved and even worn, and on a good day one can hear a debate about war between a 50 year-old woman and a 10 year-old boy.

In the communities of the Inland Valley, namely La Verne, Clare­mont, San Dimas, Pomona, Glen­dora and even as far as Upland, the clash between ideals can be visited every week.

On Thursday, April 3, La Verne resident and Vietnam veteran Edward Kiernan stood on the corner of Arrow Highway and D Street in La Verne with Joe Chambers and the two waved American flags at passersby.

“I’m out here to support our troops, our president and our country. The troops are doing a great job, they volunteer to go out and put their lives on the line. People need to realize that freedom doesn’t come free, there is a price,” he said as he gives a thumbs up to honking truck speeding by.

Up the street on the corner of Foothill Boulevard and D Street, another group is gathered, but their flag hangs upside down.

“It means that the country is in distress,” says one of the protesters to a woman in her car who says, as she flips off the protesters and honks her horn, “You should be ashamed of yourselves, hanging the flag that way!”

The anti-war advocates on this side of D Street also carry signs that say “We support our troops!” the only difference is that the signs also say “…but we don’t support this war!”

“It is inaccurate to say that we are the ‘anti-war people’ and they are the ‘support our troops people,’ because we too support the troops and we want them to come home,” said Cindy Thomas, La Verne, who labels herself a concerned citizen.

Thomas is just one of the 20 or so people gathered on this corner in front of In-N-Out with their fingers in a “V.” They encounter varied responses in the hour long period in which they have perched themselves.

The conflict that all of these demonstrators encountered on Thursday, however, is mild compared to scene on Friday evenings at the intersection of Arrow Highway and Indian Hill Boule­vard in Claremont.

On Friday, April 4, the sight was expected. It was almost exactly the way it was every week. A blend of stars, stripes and peace signs clouded the air and the voices rang messages from many agendas.

On the north side of the street, a large banner covered the corner reading “We support our President, We support our troops!” Everyone in this clique sported the national colors – red, white and blue. Young girls stamped around the four corners of the intersection chanting “Hey, Hey, U.S.A!”

Chuck Olsen of Rancho Cuca­monga feels strongly about what he believes it means to be American.

“We have made a decision to free up the Iraqis and I support our troops. And if you don’t you are not with the USA,” said Olsen.

Meanwhile, the southern side of the street heard the sounds of guitar playing and song singing. The anti-war/peace advocates all carried the messages above their heads.

Rosie Kraemer-Dahlin,12, of Claremont wears a sign around her neck and back that says “No War.”

“I don’t like the idea of it. It’s not fair to bomb places, it hurts innocent people and that is not right, especially since they haven’t done anything to us.”

A magnified look at what happens in small communities will show these neighbors are ultimately torn between their beliefs and streets that divide the corners. 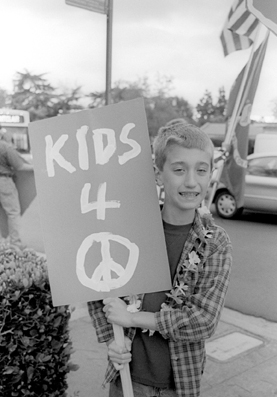 Eight year-old Kyle Bennett of La Verne thought it would be fun to make this sign. Bennett said he believes in peace and made the sign by himself. Bennett braved the four corners of the divided street rally in Claremont and said he was representating other children who share his beliefs. / photo by Jennifer Contreras 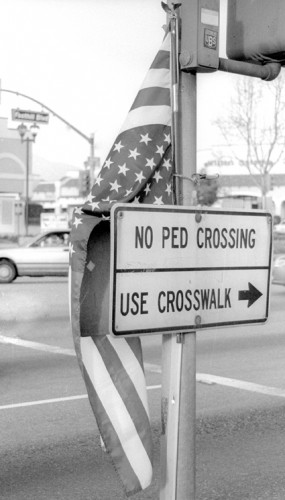 Anti-war protesters hang an American flag upside down on the corner of Foothill Boulevard and D Street in La Verne. Protesters say it symbolically shows that the country is in distress. A negative reaction came from drivers who shouted things like : “You should be ashamed of yourselves!” and “You are going to hell!” / photo by Jennifer Contreras 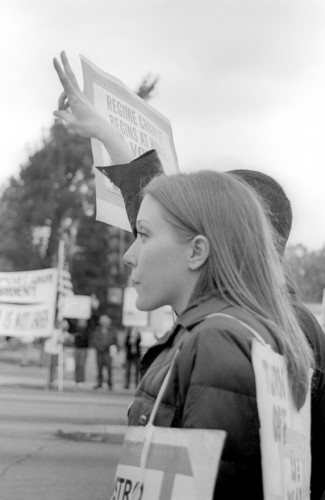 Jocelyn Sherman of Upland feels that the public is not being given the whole truth. She uses the recognized sign of peace on the corner of Indian Hill Boulevard and Arrow Highway in Claremont. Sherman argues, in response to those across the street, that the best way to support the troops is to bring them home. / photo by Jennifer Contreras 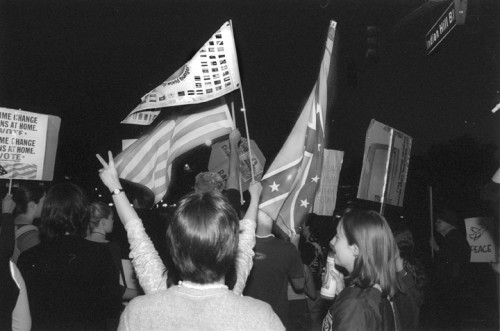 Three teenage boys from Claremont High School, who asked to remain anonymous, confront anti-war advocates with an American flag and a Confederate flag at a street rally in Clare­mont. The boys added that when they are old enough they will enlist in the U.S. military. / photo by Jennifer Contreras 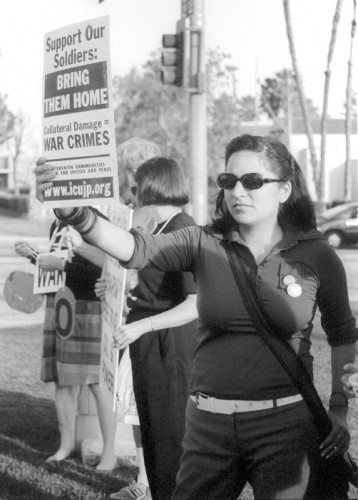 Anti-war protesters began carrying signs that support American troops when they felt they were being viewed as unpatriotic. University of La Verne senior Denisse Rodarte participated in the first Foothill Boulevard and D Street protest on March 20. / photo by Jennifer Contreras 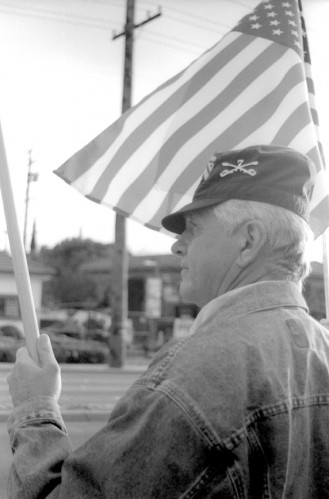 In direct response to the anti-war protests on the other end of the street, La Verne resident Joe Chambers stood on the corner of Arrow Highway and D Street. Chambers said that when he heard about the other protests, he felt a need to come out and support the troops in Iraq. / photo by Jennifer Contreras 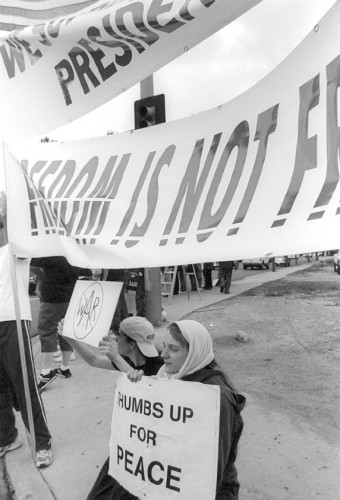 In a weekly protest in Claremont, the battle is to get the corner spot on the street. When the corner was occupied by those who support the war, two students of Scripps College sat underneath the banner that read “Freedom is not Free.” Shirley Proctor and Emily Parsons said, “The corner is the best spot.” / photo by Jennifer Contreras 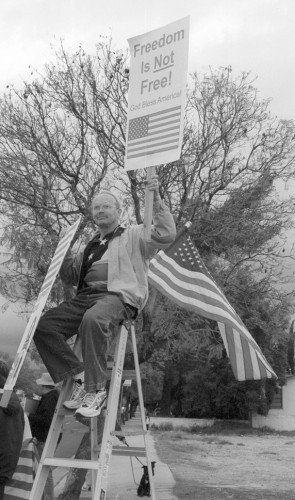 Claremont resident Kris Meyer says he is tired of the negative coverage of protests and says this is why he went out to a street rally to support them. “They are freeing a country that needs to be freed and I support them wholeheartedly.” / photo by Jennifer Contreras

From a soldier’s point of view
$40 for activities, for whom?