By Jennifer Contreras on April 25, 2003 in Community News, News 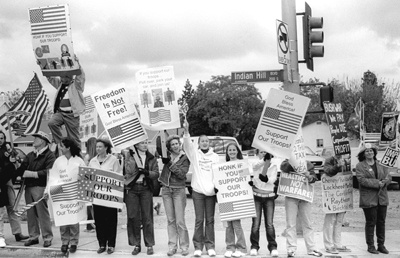 The corner of Arrow Highway and Indian Hill Boulevard was the sight of a war rally, with people from all sides of the issue. April 4, was like any other Friday afternoon where community members carried signs and banners to show either their support for the war or their opposition. Those rallying for the support of U.S. troops in the Middle East say that their demonstrations are in direct response to the anti-war protests that started as early as last fall. / photo by Jennifer Contreras

Leos third in nation
‘Doing their own thing’ live