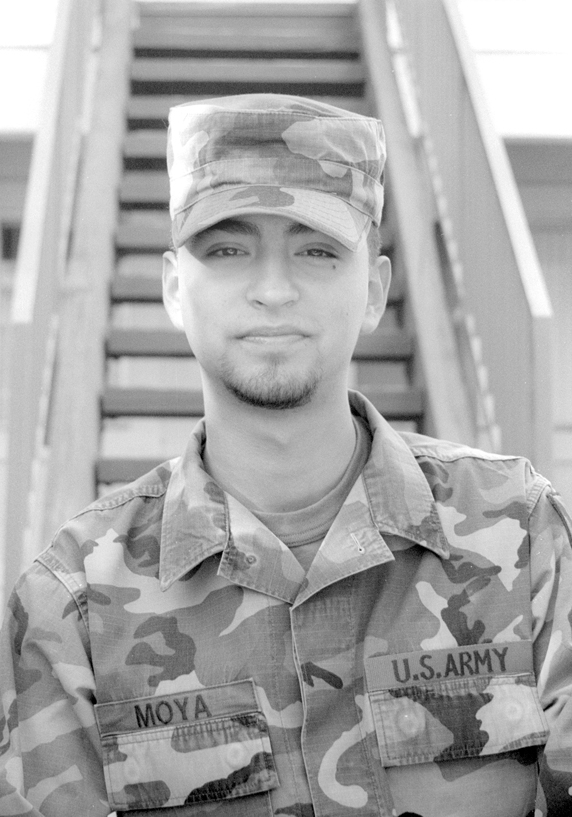 Private Sonny Moya of the United States Army joined the military as a means of supporting his college education. Moya said that he never thought any conflict would occur during his time of service, but his time in Kuwait proved he was wrong. Although Moya was recently released with an honorable discharge, his commitment to the U.S. Army still exists and he says he is ready and willing to go to Iraq if the Army needs him to go. Now that he is back at home, Moya plans to pursue an degree in oceanography. / photo by Jennifer Contreras

In an endless desert in the Middle East, they built a sand city they called a “Kabal.” On a daily basis, they would wake up at five o’clock and run three miles in the sand, then shower and eat a pre-packaged, pre-cooked breakfast.

The Kabal has method – it is built with tanks surrounding the perimeter so that, if needed, they could break out quickly. About 500 men and women served in this mission. Twenty-two-year-old Sonny Moya was one of them.

“One time I was in one of the Kabals in a ‘PX,’ which is like a store, and we heard shots – like an AK. I turned around to see a Blazer driving away. Everyone gets their guns and gets down. They were shooting at the Military Police. The first thing I thought was, we are all going to die,” said Moya.

Moya was a part of a United States Army unit that flew to Kuwait shortly after Sept. 11, 2001. He had just joined the army in January of that year.

“After 9/11 the whole Army was on stand-by or ready to deploy. My company did not go, but the headquarters sent me and changed my position to a mechanic that worked on light-wheeled vehicles,” said Moya.

When he found out he was going to Kuwait, Moya says his unit did not know where it was going or why. According to Moya, this is procedure for protection against the potential harms of information leaking out.

“When we got there we picked up everything and they handed us ammunition. We had nine millimeters [guns] and we were told to always have it on us. It was pretty scary, I didn’t know what I was getting into,” he said.

“Operation Enduring Free­dom” was the name of the anti-terrorism mission that sent Moya to the Middle East to provide protection for the Kuwaiti people. Moya spent six months in Kuwait and did not get to meet one Kuwaiti person.

According to Moya, many soldiers do not feel support from their fellow Americans because of media coverage of people protesting the reasons they are abroad.

“The media shows all the bad stuff people say, never the support. And when you get back, you do not hear ‘thank you.’ You do not feel the support you think you deserve. Older generations are the ones that say thank you. I think it is because most of them have served in the military. The younger generations always want to protest against something, it is easy for them to protest,” he said.

While in the Army, Moya says that everyone is there for different reasons and they all come from different places. A bond builds because there is no color but green and everyone is your brother.

So, even though he is not in Iraq now, Moya says he knows how his comrades are feeling while they are overseas and he understands why they are there and how they are getting through it.

“Bottom line, I think [Saddam] Hussein needed to be put out of power. He does support many terrorists groups and he tortures his own people. He leaves them out in the desert with no food or water and tells them to fight.

“The majority of his people do not support him. And if we didn’t go in to help, sooner or later a lot of people will be hurt. The boys there are not fighting for Bush or power or oil, they are fighting for their families. I know that is why I went,” said Moya.

The first Gulf War failed to remove Saddam Hussein from power. Moya feels that the U.S waited too long and only allowed Hussein to get stronger. As a result, Moya feels there is a misunderstanding as to why people support the war.

“No one is going to support people dying, but people support it because it has to be done,” he said, “People who support the war do not necessarily support Bush, I don’t. But he is the Commander-in-Chief, so I support him in that way. Who are we to judge what he does? We put him in power.”

As for regime change, Moya is confident that once the U.S. military has accomplished its goals for Iraq it will leave the country and return sovereignty to Iraqis.

“I don’t think we should stay and try to run their country. It is not ours, we don’t belong there,” he said.

On March 9, Moya received honorable discharge after his two years of active service with the Army, but he still has a six-year commitment. Being home while his friends are abroad fighting a war, Moya takes it personally when he feels that the public is not showing support for them.

“The only time when anti-war protests effects me is if they are talking about the soldiers. It really hurts. It’s war. It is what happens. And it is their freedom and ours that they are fighting for. I just want people to support the soldiers; they are not fighting for Bush in their hearts.”

Anthony is vocal about her opposition to war in general. She was even on the planning crew for a peace fair held in Clare­mont.

“We don’t really talk much about the issue because we differ so much in opinions,” she said.

Nonetheless, Anthony supported Moya during his time in Kuwait.

Despite his feelings on anti-war protests, Moya understands why people do it and even agrees it is necessary.

“People need to protest war, it is healthy. But do not protest the troops. They are fighting for the love of the people in the states. That is what keeps them going everyday, I guarantee it,” he said,

“This country was built on its youth. And it is the youth of this country that will hold it together. That is what I believe.”