By Janah Valenzuela, Sylvia Castellanos on April 4, 2003 in LV Life 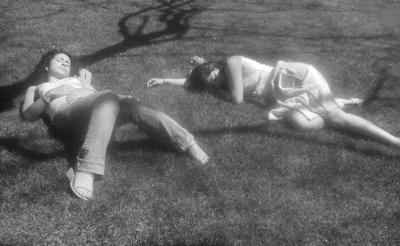 Soraya Askari and Sylvia Torres take advantage of the spring weather Tuesday afternoon in the Quad. Askari barely made it to class, as she napped until 5 minutes before. / photo by Sylvia Castellanos

The countdown to spring break is on as students scramble to finish delayed papers and last minute projects.

Because of the war, some students have reconsidered their travel plans, but many have not given a thought to giving them up.

So what do University of La Verne students have in mind for this spring break?

Junior Chris Hezlep plans on going home to Colorado, bringing along his girlfriend and some friends.

He said he was not worried about the war or taking a plane back home.

Sophomore Amy Kelly said she was not concerned about flying home either.

Kelly’s plans include relaxing at home and driving to see a friend in Chico.

Her main concern about the war was the price of gas affecting her break.

Freshman Roger Logan, however, said the war did affect his plans, and he chose not to travel far or take a plane.

Instead, he plans on going home to San Diego, going to the beach and hanging out with friends.

“It hasn’t crossed my mind,” Lovallo said, “I just plan on relaxing and spending time with my friends and family.”

Sophomore Sarah Davis plans on doing the same at her home in Arizona.

“I’ll probably just be doing homework most of the time,” Davis said.

Some student athletes will be spending their break competing outside of La Verne.

Senior Audrey Butcher is planning a trip to Las Vegas, with friends.

Butcher also said she is not worried about traveling during wartime.

“I think it’s good to just hang out and be with your good friends at a time like this,” Butcher said. “It helps take our mind off of things for a while.”

Junior Pete Hanson is among a few other students organizing a spring break trip to Rosarito Beach, Mexico, through Summer Winter Action Tours.

With SWAT, students can vacation to Mexico starting at $229.

The trip includes four nights and four days at either a deluxe or standard hotel, a SWAT wristband that takes care of cover charges at all SWAT events and free meals, plus drink specials. SWAT representatives, such as Hanson, go on the trip for free if they get 10 students to sign up. About 70 ULV students are signed up for the trip.

Freshman April Cardoza, who also signed up with SWAT, remains hopeful about the trip to Mexico as well.

“I’m just planning on being with friends and having fun,” Cardoza Said.

“I’m not worried, and I think by worrying about things too much, we’re letting (our enemies) win,” he said.