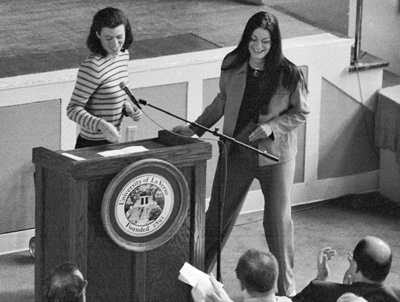 The event honors top students from each department or program for academic achievement throughout the school year.

And while the awards focus on academic excellence in the specific disciplines, the ceremony had the feeling of a celebration of these top students for their overall accomplishments and contribution to the community in and outside of the classroom.

Some faculty presenters gushed in their short speeches honoring the students, often thanking them for mutual lessons learned.

In addition to awards in the various subjects and disciplines, Bailey Smith, director of the Learning Enhancement Center, honored Payam Parchamazad as Tutor of the Year, and Andrea Labinger, professor of Spanish, honored Anahit Shiroyan and Julia Marr for their accomplishments.

New at the ceremony this year was an award from the recently established Speech Communication Department.

Department Chairwoman Jeanne Flora gave the award to Speech Communication Major Audrey Butcher, who will be the first major to graduate from the department.

Flora said Butcher has been a great mentor and advocate to other majors and minors in the fledgling department.

Flora said she remembers how excited Butcher was when the new major became available.

“Audrey came to my office and said, ‘I’ve been waiting for a major like this at La Verne,'” Flora said.

“It’s satisfying to know that we’re meeting the needs and desires of students with similar interests as Audrey,” she said.

Such expressions of mutual appreciation summed up the tone of the ceremony, where some faculty and students exchanged hugs. Some students introduced parents to their favorite instructors, and even a few tears of joy and pride were shed.

Undoubtedly heightening the sentiment and feelings of a job well done, the nearly three-hour event was hosted by John Gingrich, dean of the College of Arts and Sciences, who is stepping down after 16 years in the position.

Tutor of the Year: Payam Parchamazad