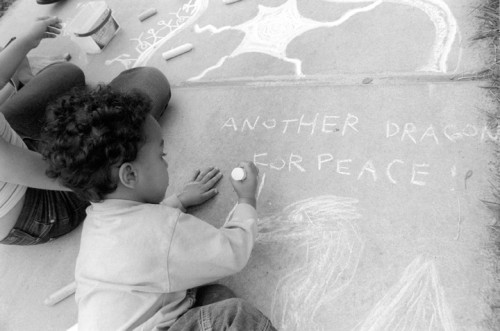 Two-year old Levi Latty, who attended the Peace and Justice Festival in Claremont with his father Jahvi, joined other patrons in sidewalk art. Jahvi said that being an activist against the war, his presence was needed at the local event. “It’s a good place to network,” he said. / photo by Jennifer Contreras

From an idea between friends to an event that brought many together, the Peace and Justice Festival on April 12 in Claremont used many mediums of expression to shed light on world issues.

“Generally we wanted the event to raise awareness about how the events in Iraq are tied in with a lot of other issues of the world. We wanted to make people think about the state of war,” said Mark Hornaday, organizer and producer for the festival.

The Sontag Greek Amphi­theater on the Pomona College campus served as the venue for the event which was sponsored not only by students from the Claremont Colleges, but also students from the University of La Verne as well as community members.

Planning the Peace and Justice Festival started in January.

Speakers, poets, musicians, rappers, artists, craftsmen/ women and vendors were put into the structure and schedule of the festival.

“To me, it was a forum for art to be a medium to express certain ideas. It was giving art to the people and seeing if they use it, seeing how they react to it and seeing if they try to initiate art themselves. It was asking people to confront their roles in society. What are we responsible for in regards to justice issues?” said Hilary Hahn, ULV junior theatre major.

Hahn, with other ULV students, served the festival by coordinating artists to contribute to the event.

The gallery for the art was a forest of trees on which the art hung from.

People were allowed to walk through two patches of trees to see the art and, in some cases, people were encouraged to interact with the art.

He said he refused to join the military during the Vietnam War and thus spent a few years in prison.

Maizlish also spoke on the realities of the uses of tax dollars and options that citizens have about their tax dollars.

An African dance and drum group made up of local students also performed.

“I was satisfied with the turn out. I had the opportunity to, in some way, change an audience. To come into contact with them and present them with artwork and possibly make a slight change,” said Hahn, who was also a contributing artist

“For some this was an opportunity to have something happen that should be happening all the time. For others, this was in response to Iraq.”

Hornaday also feels that the event was successful in its goals and philosophy.

“We wanted to create an opportunity for like minded people to connect with one another as well as raise awareness about current world issues. I think it was effective in both of these purposes,” he said.

Organizations involved in the Peace and Justice Festival were the Student Peace Coalition of the Claremont Colleges and the Seminarians from the Claremont School of Theology. 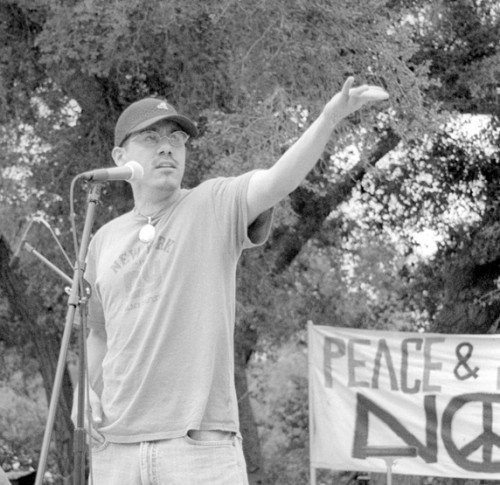 Poet Mark Gonzales shared his work at the Peace and Justice Festival several times throughout the day. “Mic and Dim Lights” is an open mic night that Gonzales performs at regularly in the Pomona Arts Colony. / photo by Jennifer Contreras 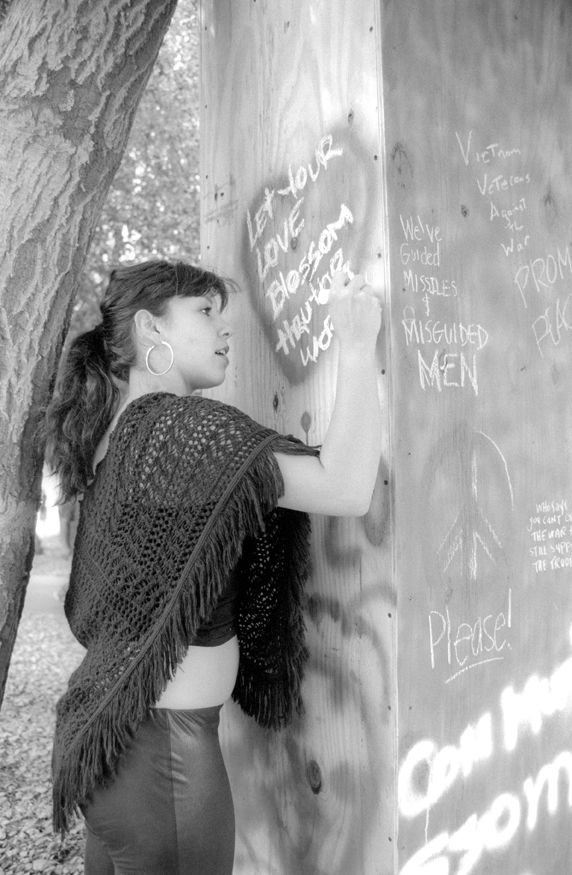 ULV alumna Carolina Quinteros uses the installation art piece at the Peace and Justice Festival, held in the Greek Amphitheater at Pomona College, to send her message. Spray paint and chalk were provided at the sight of the piece which is a wooden booth built by ULV senior Mabel Martinez. / photo by Jennifer Contreras 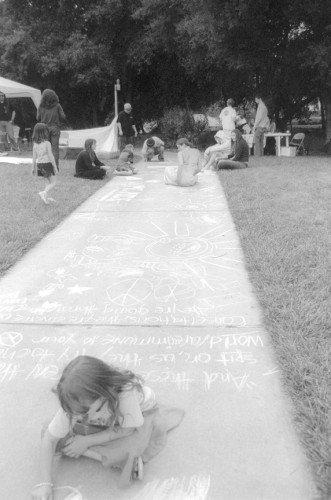 An entire walkway was decorated with colorful chalk at the Peace and Justice Festival. Gillian Tracy, 6, of Claremont sat in chalk to draw a rainbow on the floor. Also on the sidewalk were quotes, illustrations and peace signs. / photo by Jennifer Contreras 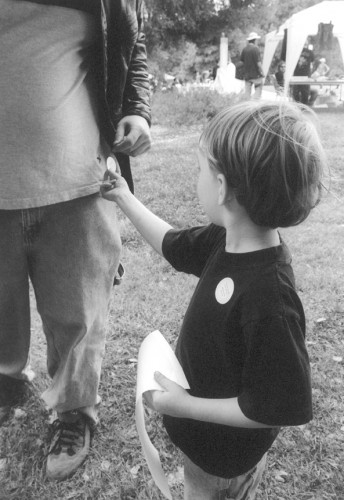 Four-year old Brodhi Tracy took a couple of sheets of stickers he found on a table and passed them out. Don Groce, Upland, receives the last of the stickers that read “Drop Bush Not Bombs” with the backdrop of a peace sign. / photo by Jennifer Contreras 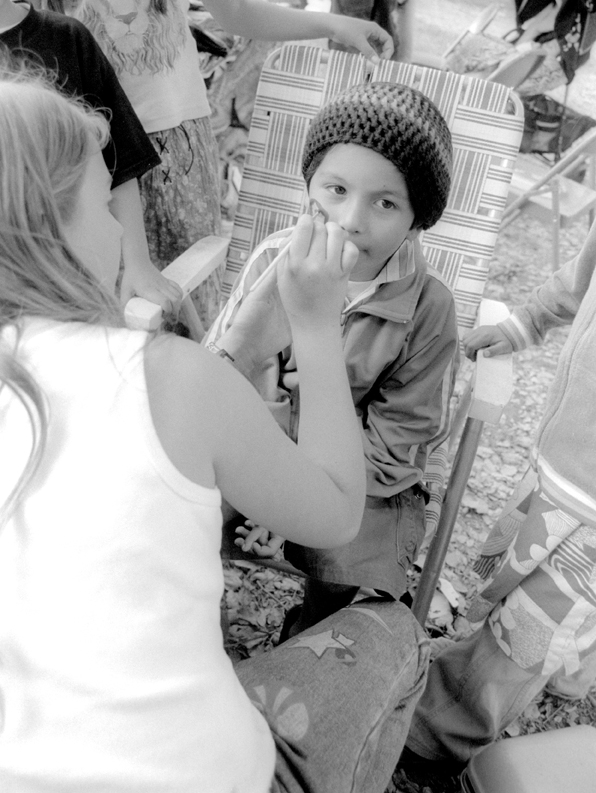 Vendors lined the perimeter of the Peace and Justice Festival, including the table of Rhiannon Gatti’s. Eleven-year old Gatti did face painting for patrons, many who had peace signs on their cheeks. Gatti has been face painting for two years. / photo by Jennifer Contreras 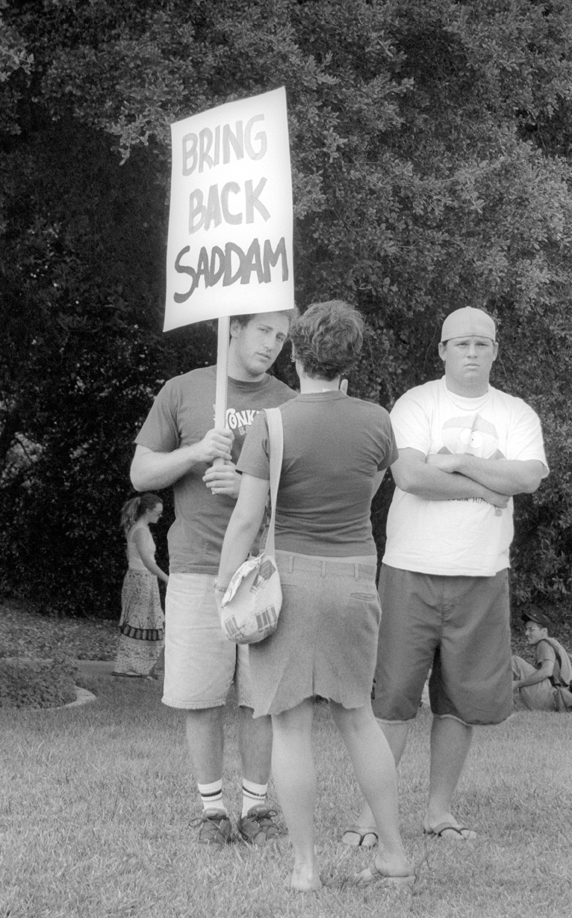 A center for controversy, a patron at the Peace and Justice Festival, who asked to remain anonymous, stood atop a small hill with his sign while various people confronted him about his intentions with the sign. / photo by Jennifer Contreras