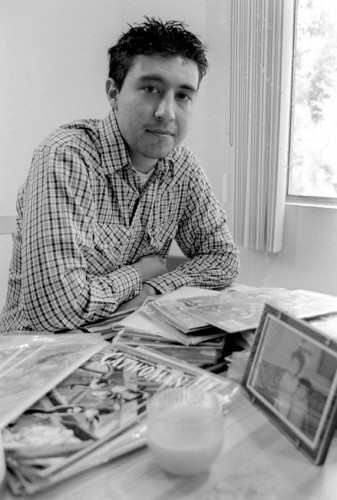 After recently being reunited with a collection of comic books, Juan Garcia thinks about his childhood and all the scheming and saving he and his brother did to get the books. “I remember that one of us had to distract my mother so that one of us could go buy the book,” he said. Garcia, ULV senior international business major, has not seen his brother more than a year. Sgt. Victor Garcia, his brother, is currently in Iraq serving for the Military Police. Garcia keeps close a picture of he and his brother as children and he looks forward to Victor’s return. / photo by Jennifer Contreras

The last time he spoke with his brother, he said that it was weird and uncomfortable. It was two days before his brother was scheduled to fly to Iraq to serve as a Military Policeman.

“I brought up our comic books to break the uncomfortable vibes. I said to him, ‘Are you taking my Wolverine comic book to Iraq?’ He said, ‘No it’s in storage in Germany,’” said ULV senior Juan Garcia.

“Comic books were the only thing we ever did together. We never hung out with each other or played together. All we had was comic books.”

Garcia’s brother, Sgt. Victor Garcia, has been a member of the United States Army for seven years. It has been about one year since Juan last saw Victor.

“He is a cook regularly and he is stationed in Germany. But he is a soldier first and they needed more MP’s, so he was called to duty in Iraq.”

Since the start of the war, Garcia has been through a series of emotions and opinions about this war and war in general. Much of his inner conflict stems from the fact that his only brother is living in a danger zone.

“At first we were not too worried because MP’s are not on the front line. But after we saw the way Iraq responded to the war, we saw that it was the MP’s and those who were based in civilian territories who were in more danger,” he said.

Garcia is referring to the Iraqi militias that were dressed in civilian clothing who were fighting, the suicide bombers and the rioters that were attacking.

“It really kicked my ass, honestly. When we finally took Baghdad I became a hermit. I stopped going to debate practice and class.

“ It was the double-edged sword that is the media. On the one hand I wouldn’t want to watch my brother get hurt on television, but at the same time I needed to know all the latest developments. And now we have the technology to be right on top of it, so how could I not watch?” he said.

Garcia adds that he felt a responsibility to his parents to know as much as possible about the war because they did not understand the politics behind the war.

Despite the obvious concern his family felt, Garcia said he and his parents played games to pretend everything was OK.

“We did it for each other’s sake. I felt that if my parents weren’t worried, then why should I be? But the truth was, we all were,” he said.

Religion has been the staple that keeps his parents from losing all hope.

Garcia’s mother in particular has rested her faith in her religious beliefs to be at peace with whatever the future brings.

“My mom believes in a higher being that is looking out for us so that she doesn’t have to. To her, whatever happens to my brother is his destiny because there is a greater purpose. I am sure a lot of people cope with it in this way,” he said.

Generally, Garcia considers himself to be against acts of war and violence.

However, his closeness to this war in particular has altered his opinions in order to understand his brother.

“At first I was obviously against it. Soon after, I was all for it. I thought that it was justified in the sense that it was supposed to be a greater deed for a greater amount of people. But right before the war started, I went back to being pissed off and against the war,” he said.

The world climate at that time was one of disagreement and conflict.

Garcia said he was angry at the way the world had manipulated the war into something it wasn’t.

“It was no longer about people dying and suffering. It was about patriotism and non-patriotism, ignorance and non-ignorance, you versus us,” he said.

This was the point that Victor was called to duty. Instead of coming home, like he was scheduled to do, he received an automatic six-month extension to his deployment.

“Then suddenly the politics and protests were gone and it was personal. I became addicted to CNN,” he said.

Garcia admits that had he not had a brother in Iraq, he wouldn’t have been so “obsessed” with the war and watching it on television. Through his connection to the war, however, he has come to some conclusions.

“I think the U.S. is hypocritical. But I am hopeful. I think there is a lot more evil in the world that is far worse than the stupid stuff we fight about in the U.S., like abortion. I think Saddam was one of those evils.

“I am hopeful that the promises made by the U.S. to Iraq are realized and even if the U.S. profits, at least we will increase the living standards of its people,” he said.

However, Garcia wonders if he feels this way only in order to honor and respect the actions his brother took in Iraq.

“I’d hate for it to be a lie. I’m hoping that we didn’t go through this only for the U.S. to go and do it again to another country,” he said.

Garcia recently retrieved his collection of comic books from his parents, who had other plans for them. This is the same comic book collection that he built with his older brother Victor.

Flipping through these relics, Garcia is reminded of his childhood, and, most of all, his brother.

“It continues to be the bond we have; my fascination with comic books stems from him. I can’t wait until we look through them together.”