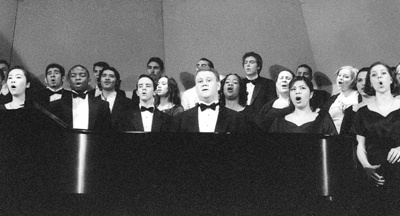 In coordination with the International Fair, the ULV Chamber Singers and Chorale performed at the International Festival of the Arts. The concert, held Friday in Founders Auditorium, featured music from Brazil, Argentina, Samoa and Japan. / photo by Jennifer Contreras

The beautiful sound of languages from Bengalese to Spanish filled Founders Auditorium during the International Festival of the Arts.

The concert gave ULV chamber singers, chorale members and musicians the opportunity to dazzle the audience with a broad range of international musical pieces.

“We were very energized, and the audience seemed like they were into it,” said chorale member Anthony Guerrero.

The week-long festival was designed to show people that the world is a lot bigger than just the La Verne community, said director Scott Farthing.

The evening started with Felix Mendelssohn’s “Hochzeitmarsch,” from “A Midsummer Night’s Dream.”

International students Hiromi Kuroda and Masami Tomita shared the piano and wowed the audience with each keystroke.

Performed by the University chamber singers, this song was entertaining.

Although no one in the audience could understand the language, the singers facial expressions and hand gestures allowed the audience to follow along.

“They had a really awesome stage presence, and they were very strong, loud and beautiful,” said freshman Dana McJunkin.

In past international festivals, Nobel Peace prize winners and peace activists were invited to the campus to take part in the festivities and provide insight.

This year, guest pianist Franklin Larey, director of music from the University of Cape Town, South Africa participated in this concert.

Larey is currently in the United States working on recordings with pianists in New York and Chicago.

Through his musical talents, Larey works to make his community better.

By being involved in numerous children’s choirs in Africa, Larey has been able to reach out and influence children, whom he said, “need exposure to other forms of music.”

For more information on international activities at ULV, contact Philip Hofer at extension 4330.