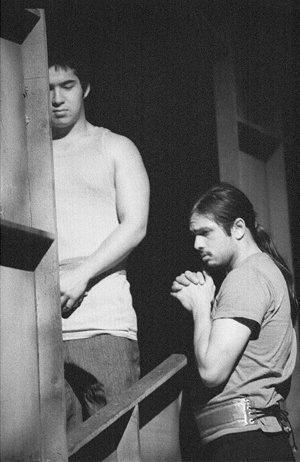 Don Horacio, played by David Baldizon, confesses to the priest, played by Keith Watabayashi, about his secret relationship with an Indian girl in “La Llorona,” which played at ULV last week. / photo by Amy Babin

A classic folktale in the Latino community, “La Llorona,” senior Veronica Estrada’s acting thesis, told the story of an Indian woman named Ix Ana (Estrada) who had fallen in love with Don Horacio (David Baldizon), a Spaniard from a rich and noble family.

Horacio’s father fell optically ill and his last wish was to see his son married. In what was custom at the time, his father arranged for him to marry Juanita Caldes (Annette Trejo).

Despite the love and three children he had with Ix Ana, Horacio tells Ix Ana that out of respect for his father, he must marry Juanita.

He tells Ix Ana his family would never accept their union because she is Indian and their children would be considered a disgrace.

However, before leaving he also tells her they might have a chance if the children did not exist.

Days go by and the word of Horacio’s marriage spreads. In Ix Ana’s mind, she replays Horacio’s last words to her over and over again: “If the children didn’t exist, there might be a chance.”

One morning Ix Ana goes to Horacio’s house to be introduced to his family. Upon her arrival he is not only shocked to see her there, but to learn that she murdered their children by drowning them in the river.

Pushed away by Horacio, Ix Ana soon realizes what she did and races to the river to retrieve her children ­ never to return again.

According to legend, Ix Ana was so heartbroken that she drowned in the river and haunts the people of Mexico and parts of Arizona.

It took Estrada a year to put “La Llorona” together, as she said she wanted to do something in tribute to her Latino culture.

“I found the script during my sophomore year and it intrigued me because I always heard stories about this crying lady,” she said. “There are so many Latino’s here at our school now that we actually had enough actors to do it.”

The emphasis on having a Latino cast made the play enjoyable and authentic.

As audience members arrived they were delightfully greeted by a pre-show, which featured Aztec dancers and genuine Latin pastries and candy.

“I was always interested in getting some type of pre-show together to get the audience engaged before they went into the theater,” Estrada said.

“I wanted them to have the energy ready and for them be focused. I thought the Aztec’s were relevant to the show because it was about an Indian girl and they added so much history to our play,” she said.

Upon entrance to Dailey Theater, the audience was greeted by spirits whispering and a stage that looked like a forest.

As the show started, cuentistas (narrators), sophomores Reinel Campa and Jonathan Serret took the stage to give a synopsis of what was to come in “La Llorona,” but not before guiding the audience through the forest to their seats.

The play opened with Horacio being measured for his wedding tuxedo and soon flashed to him seeing Ix Ana and then passing out.

As the play went back and forth between the past and the present, the spirit of Ix Ana haunted Horacio.

Acting wise, the entire cast did a great job. It was easy to feel and sympathize with the sorrow, confusion and joyous moments of each character.

It was also easy to envision being Ix Ana as she was a representation of our need to love and be loved in return.

“(The play) was good,” said Taylor Wells, an audience member.

“It kind of had a dark side to it. It seemed like a lot of reality. Even though (cultural differences) seems like it was ages ago it still exist today,” Wells said.

Sophomore Sarah Morphis said “it (was) wonderful to see the talent that ULV students possess.”

While the story was mostly in English, the integration of Spanish during certain lines and songs did not take away from the understanding and enjoyment of the play.

In fact, the mixture of English and Spanish added to the realism of the characters being Latino.

The close interaction between the cast members was also very evident. It is sometimes rare to see and sense such a fondness between actors and actresses on the stage.

“Veronica was a real pleasure to work with,” said senior Margaret Tipton, who was a vocalist and dancer in the play. “She always made sure that everybody was doing well and that they were comfortable.”

“It was really cool. Everyone was so much fun to work with,” Lopez said.

“They were crazy and upbeat and the energy was there, so that made it a more enjoyable environment. And the director, (senior) Hillary (Hahn), was great,” Lopez said.

Another highlight of all three evenings of “La Llorona” was the huge support of the Latino community.

“It was a night of Latino influence so I know that had a lot do with bringing a Latino population out here,” Baldizon said.

“Everyone heard this story when they were kids from their mom or grandma. Seeing it on stage had to have affected them, because I know it did for me,” he said.

“I loved working with Hillary and the entire cast and it was very much a collaborative effort,” he added. “I learned a lot of about people’s work ethic and their own folktales they brought to the play.”

“I’m just really glad that everyone came to see the show,” Estrada concluded.