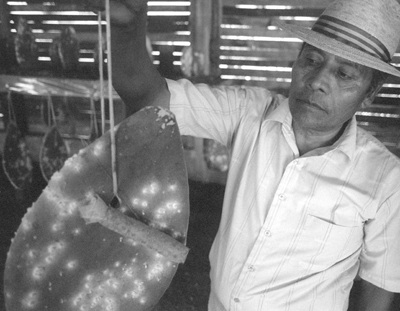 Zapotec Indians are the largest indigenous group in the Ciudad Oaxaca area. On the outskirts of Teotitlan del Valle, a village near the capital city, Benito Hernandez cultivates dyes like his Zapotec ancestors have done for centuries. To make red dye, he infects cactus petals with tiny white parasites. When the females are mature, he removes the bugs from the cacti, drys and grinds them into a fine red powder. The powder mixed with different elements is then used to color cotton or wool. / photo by Jason Cooper 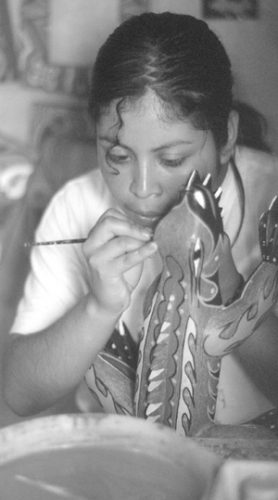 Years of making fine lines and small colored dots have made this artisan from the Ramirez-Ruiz family cross-eyed. In Arrazola, the “alebrijes” she works on sustain not only her village’s economy but the capital city’s as well. People travel from all over the world to collect these artisans’ work. / photo by Jason Cooper 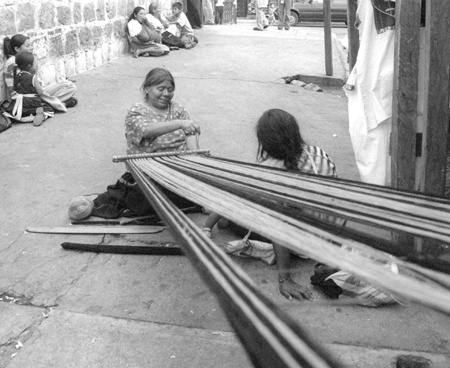 Every year during the holy week, starting with Palm Sunday and ending Easter Sunday, artisans from all over Oaxaca del Valle come to sell their work to thousands of tourists in the city. Booths line Calle del Alcala leading up to the Zocolo, a square bursting with commerce. Indigenous women weave rugs and scarves, embroider blouses and whip chocolate drinks hoping to pique the interest of these foreigners. These artisans may travel two hours every day to sell their work. Some will make enough money to live on for half a year. / photo by Jason Cooper

“Pase” they say as you walk by their living rooms converted into tiny boutiques. In the village of San Martin-Tilcajete, tiny wood animal figurines are what pay the bills. Almost every residence has a store selling “alebrijes” and a young child trying to solicit your business. This boy waited as members of a ULV group looked at figurines next door so that he could also entice them to come in and have a look at what his family had to offer. / photo by Jason Cooper 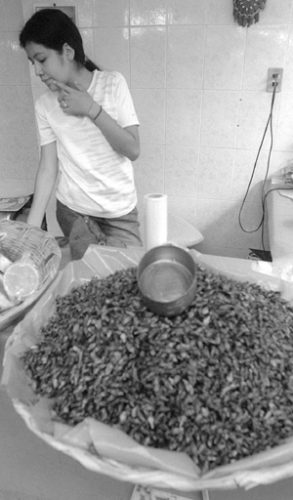 Bugs in the market might bring an “F” rating in La Verne, but in Oaxaca, they are delicatessen. People like “Jessica” arrive at Mercado Centro Abasto at 5 a.m., to sell seasoned crickets or “chapolines” A large plastic bag might cost a dollar. / photo by Jason Cooper 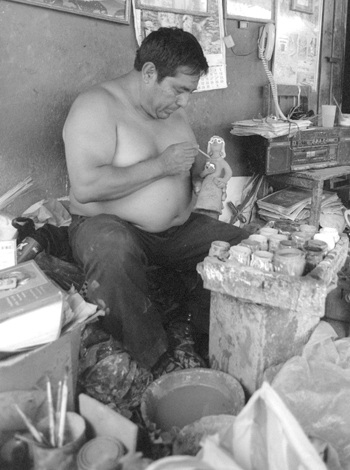 In the Aguilar family everyone has a role in producing statues, the main export of Villa Octotlan, a village outside Ciudad Oaxaca. One molds the clay, another fires the oven, and others may paint, but they all smile at customers in hopes of making a sale. Covered in clay and paint, a member of the Aguilar family works on a statue. He chuckled when he admitted this statue was a replica of an American “turista.” / photo by Jason Cooper