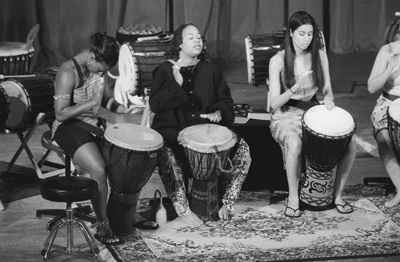 The University of La Verne’s West African Drumming class marched into Founders Auditorium Monday to the beat of their own drums.

Students, led by director Steven Biondo, graced the stage with a variety of colorful drums as well as traditional West African wardrobe styles that created an energetic and authentic atmosphere.

“The drums and the costumes really added to the experience,” said audience member Erica Pembleton.

The performance was a celebration of traditional rhythms originating mostly from the Malinke people, once from the Mali Empire.

Origins of this music date back to the 12th century but as the ULV students demonstrated, its beat and rhythm continue to live on.

The group entered the stage performing “Bao,” a rhythm played as a festive initiation for young women in their village.

“Bao” was followed by “Mamaya,” which is an elegant rhythm intended to accentuate the beauty of the male and female dancers.

Following “Mamaya,” Biondo took a moment to introduce each of his 10 spring semester students by name and instrument.

“Don’t they look great?” Biondo asked, as he completed his introductions.

The group continued to perform three more rhythms called “Kassa,” “Djagbe” and concluded with “Soli,” a rhythm associated with circumcision and initiation.

The group then cleared the stage during a brief intermission for special guests Raynor Carroll’s Ensemble KuKu.

The professional ensemble volunteered their time to be a part of the West African drumming performance.

Carroll is a member of the Steering Committee for the Los Angeles Philharmonic’s Fellowship for Excellence in Diversity.

He is also a participant in concerts on the Los Angeles Philharmonic’s New Music Group series.

Students put on this show as part a requirement for the West African drumming class.

Students are also educated in the cultural background and tradition associated with the instruments used and selected rhythms.

The music is taught in the aural tradition and emphasizes cultural diversity.

Biondo, founder and director of the West African Drum Ensemble at ULV, is currently the assistant technician for the ULV Music Department.

As a drummer, percussionist and recording artist, he began to be influenced at the young age of 10 by jazz, Latin, Cuban and African percussion.

Biondo has performed and recorded with various artists, including Ricky Lawson and The Reed Gratz Band.

Biondo thanked his students for their patience in his process of charting the course for the future of the ULV West African Drum Ensemble.