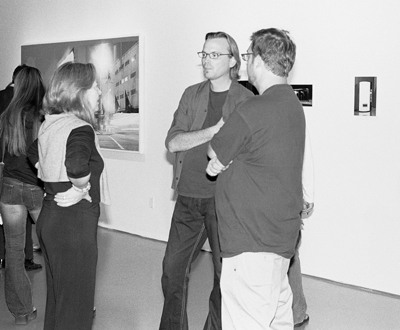 Art Department Chair, Curator and Director of the Harris Art Gallery Ruth Trotter speaks with Steven Criqui and Robert Olsen, two featured artists at the opening of “Place” Tuesday night. Eight artists are featured in this collection of paintings and photographs that challenge the viewer to look at every day places in a different way in hopes of creating a greater appreciation for those places. / photo by Blanca Rocha

Los Angeles is a vast city with a story on every street corner. For the next month, some of these stories will be shared with the La Verne community through the artwork on display in the Harris Art Gallery.

The works of these artists tell their stories of life in L.A.

Every day Wilson would drive the same path from the studio to the gallery. Before leaving the studio he would reset his odometer, and at every mile he would get out of his car and take a picture of where he was.

He said he used portions of all the pictures to make the piece “5 Mile.”

“5 Mile” is comprised of five square blue canvases. Each square represents the five-mile trip he would take to get to the gallery. The blues range from a medium blue to a deep violet.

“The pieces are familiar to me but they could be anything to everyone else,” Wilson said.

The corner of Fairfax Ave. and Wilshire Blvd. is one of the most known street corners in Southern California. Therein lies the inspiration that led to one of Criqi’s untitled pieces.

Parts of several pictures taken by Criqui make up his portrait of this famous street corner. Using a camera and a tripod and moving the camera a few feet for every shot, Criqui photographed the closed Johnie’s Coffee Shop.

He then pieced together roughly 30 photographs using a computer and painted over it by hand.

“It is a famous corner,” Criqui said. “I wanted to make the picture look spectacular while making what it really is. I wanted to redeem it in some way.”

While visiting friends in Bushwick, N.Y. Olsen spotted the main topic of the piece titled “Civic 3.” He said that he wanted to make the bus shelter look like any other bus shelter a person would see, which is why he left out any specific information that was on the bus shelter. He also painted the soda machine in his studio and a gas pump. “Bus Shelter” is the only Olsen piece that contains text, which are two marks of graffiti on the glass of the shelter.

“I didn’t want to be specific,” Olsen said. “I wanted to be more vague. I was concerned with the empty.”

Olsen has painted since 1990 and graduated with a master’s from UCLA in 2002.

There are 19 works of art on display in the Gallery, but none caused more conversation than the photographs of the Brady Bunch living room and dining room.

Viewers of the show were unsure if it was the actual house from the television show.

The three pictures that go inside the Brady house, titled”X-Files,” offer a blast back to those Brady days.

The pictures make it seem as though the house is still being used because the light is on over the table. It looks almost the same with only one exception: instead of having only six chairs, there are seven in the photograph.

The vibrant colors used made the pictures eye-cathcing to many.

There are various other photographs of different areas in Los Angeles.

Those three photographs combine to make the piece titled “City Blues,” by Müller. ULV alumna Mabel Martinez, class of 2003, was shocked to learn that one of the houses in the background of the photo was a two-story house she used to live in while she attended the nearby Belmont High School.

An opening reception for the show was held on Wednesday night.

The artists had the chance to see their work up on the gallery walls and hear what the public had to say about it.

It was the public’s first viewing of the show, which earned good reviews from students.

“I love the colors. They look like they could be postcards. The work is nice, I love it,” she said.

“I love how all the artists emphasize their art in Los Angeles, mainly because I’m from L.A.,” said senior Cecilia Covarrubias, art major.

“PLACE” will be in the Harris Art Gallery until Oct. 10. For more information on the exhibit or for gallery hours, call extension 4763.

Happenings
Feedback: Wake me up when it’s over