By Amy Babin, Chrissy Zehrbach on October 10, 2003 in Sports, Volleyball 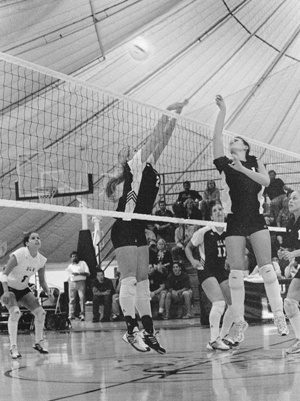 There is something about the University of La Verne volleyball team that its Southern California Intercollegiate Athletic Conference competition cannot seem to overcome.

The Leopards tacked on three more wins to their record for consecutive SCIAC wins this week, increasing the streak to 28.

With many strong performances, the team pulled together a quick win to shut out CMS Tuesday night.

As a team, the Leopards’ hitting percentage was .337, compared to their opponents at .030.

Middle blocker Tricia Schary had nine kills in the match for a team-high percentage of .615. Opposite Adele Jones hit .583 with eight kills.

“We got into a real good rhythm,” head coach Don Flora said. “Probably the best we’ve played against anybody in conference so far.”

Monday’s non-conference match against Chapman was a good challenge for ULV.

“It was close the whole time, but we played really well and stopped them at the net a lot,” Schary said. “We came out and executed well as a team.”

The Panthers put up a good fight against ULV throughout the game, but the Leopards showed no mercy as they held Chapman to an embarrassing hitting percentage of -.027. The Leopards hit .236 on the evening.

“Our offense pulls us through,” Flora said.

Outside hitter Amy Kratochvil reached double digits in both kills (10) and digs (11) against the Panthers.

With five kills, setter Amanda Thomas led the Leopards with a .667 hitting percentage.

Although the team worked hard for the win, Flora admitted the team’s focus was directed more toward conference competition and the upcoming weekend in Atlanta, Ga., where the Leopards will face Juniata (No. 1), Emory (No. 14), Ohio Northern (No. 17) and Simpson (No. 21).

Flora said the tournament will serve as a good midseason test for the Leopards as they face very talented, nationally ranked competition.

“Those were two really important wins,” Flora said. “It’s hard to win away, and even harder to win back to back away. We find ways to win in tough situations.”

Consistent with the level of play this season, ULV wasted no time finishing off Cal Lu Saturday night in Thousand Oaks.

“Cal Lu was a scrappy team; they dug a lot of our balls,” Schary said.

But the Leopards outmatched the Regals. While Cal Lu recorded 47 defensive digs, ULV had 59. Outside hitter Amy Smith contributed 22 of those digs for the Leopards.

In a surprise twist of SCIAC play, Redlands took the first game against the Leopards Friday night in Redlands.

“Every team we play is coming out strong against us because we’re No. 1 in conference,” Jones said. “They took us by surprise.”

ULV bounced back and took the next three games to keep its SCIAC record clean.

“Defensively, Redlands challenged us and gave us a run for our money,” Schary said. “Redlands came to play and tried to beat us ­ unfortunately for them they didn’t.”

On defense, Kratochvil was on fire, recording a match-high and season-high 35 digs. Smith also recorded double digits in digs with 14.

“It’s part of their mental focus, their mental effort,” Flora said about the team’s strong performances throughout the week. “It shows through how hard they’re working and training everyday.”

The Leopards, as individuals and as a squad, have been consistent in their domination this season tallying high numbers in statistics as they did this week.

“We train so hard in practice, and our coaches prepare us so well,” Jones said. “That training and practice lead us to those numbers.”

Such strong individual performances add to the depth and strength the team has as a unit.

“We’re really fortunate that, as individuals, we’re very athletic and very talented,” Schary said. “When we come together and work as a team, we’re unstoppable.”

The Leopards compete in the Emory Tournament today and tomorrow.

“We play a really tough schedule,” Jones said. “It’s a good experience to compete out of conference. I expect us to do really well.”

With a 15-1 overall record (6-0 in SCIAC), the Leopards maintain a No. 4 Division III national ranking.