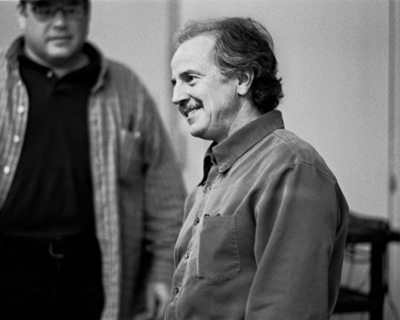 Pulitzer Prize winning photographer Don Bartletti greets the audience after his talk “Bound to El Nórte” in La Fetra Lecture Hall Oct. 2. The talk included a presentation of pictures from his travels from Honduras through Mexico and the people he met trying to make their way to the United States. Young Honduran boys traveled dangerously by train in hopes of locating their parents, who had left them behind to find work in this country. / photo by Jenna Campbell

A journey that took Pulitzer Prize-winning photographer Don Bartletti thousands of miles from Honduras to suburban North Carolina by rail, raft, truck and foot brought him last Thursday to La Fetra Lecture Hall where he discussed his award winning series “Enrique’s Journey,” currently on display in the Carlson Gallery.

Bartletti, a photographer for the Los Angeles Times Orange County Edition, won a Pulitzer in April for his work with writer Sonia Nazario on a six-part series detailing migrant children who undertake a perilous journey to enter the United States from Central America and Mexico.

“Enrique’s Journey was probably the most incredible assignment,” Bartletti said of his almost 32 years as a photojournalist.

His colorful and sometimes rough language evinced his passion for his work.

“I’m as excited now as I was when I started at Vista Press,” Bartletti said.

Speaking to a full-house, Bartletti introduced himself and the background of the story before narrating an hour long slide show culled from his pictures.

“I was really shocked that someone ever even thought of doing a project like this,” said Cecilia Covarrubias, a senior art major. “He really captured everything. Coming from a Mexican background, I know a lot of stories like this. He really captured a lot of images that go left unsaid about the struggle to get here.”

In front of a conflicted backdrop of desperate children and lush tropical scenery, Bartletti combined his own narrative of gathering the story with those of his subjects.

Shooting mostly from the top of fast-moving freight trains, Bartletti spent more than five months retracing Enrique’s steps, facing the same hardship and perils as the thousands of children who attempt this trip each year.

“I was not just looking for groovy pictures, I came with a script. I knew Enrique’s journey already, and I had to find a way to show it visually,” Bartletti said.

Bartletti said many of these children, some as young as nine, seek mothers who have already emigrated to the U.S., but only one out of 100 succeed in entering the country.

Enrique’s story began in Tegucigalpa, Honduras. With great guilt, his 24-year-old mother Lourdes left him and his sister with family in 1989 to find a job in the U.S. that would allow her to send money back to the children.

Life in the U.S. was not easy, and while Lourdes could afford to send each child $50 each month, she could not afford to have them smuggled into the country.

Enrique, however, is no wide-eyed innocent, but his flaws reflect his reality.

He grew up a damaged child. Handed off from relative to relative, he took to snuffing out his pain and hunger by snuffling fumes from jars of glue.

His sense of abandonment and hopelessness led him to pin of his hopes on finding his mother. When he finally decided to try to follow her north, he had to leave behind a girlfriend he had impregnated.

Bartletti rode the trains again and again until he got the shots he needed. In fear of being robbed, he would leave the route and return to civilization every chance he could to mail back his exposed film.

He was robbed of all his equipment once and the Times was able to send him new gear.

Unlike the children on the train, Bartletti could get off to refresh himself with good food and sleep. He also had a letter from the assistant to Mexican President Vicente Fox urging authorities to cooperate.

He said it was difficult, but important not to give in to the temptation to help the kids by giving them money.

“Photojournalists are enslaved to the principal of objectivity,” said Gary Colby, chairman of the photography department. “They work hard not to influence the things they photograph.”

It took Enrique eight attempts to make it into the U.S., where he eventually found his mother in North Carolina.

“Bound To El Nórte” has been showing in the Carlson Gallery, and concludes its run today at 6 p.m.

Bartletti’s photographs and the six-part story can be found at www.latimes.com/news/specials/enrique.