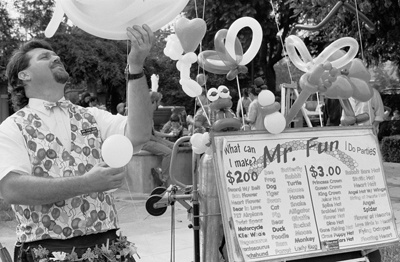 Balloon artist Steve Mings sold his creations on Saturday at the annual Harvest Festival in Old Town La Verne. Along with balloons, the festival included vendors selling items that varied from jewelry to tamales. Visitors participated in activities that included music and a scarecrow contest. / photo by Blanca Rocha

Homecoming events at the University of La Verne brought a large turnout to the annual La Verne Harvest Festival on Nov. 8 on D Street and 3rd Street in La Verne.

“The turnout has been great this year, because of all the extra attention from the University,” said Dawn Cooper.

This is Cooper’s third year at the festival. She has a home- based business of scrap booking, called Creative Memories.

Cooper said that the festival helps build her clientele, book parties for her business and bring attention to the art of scrap booking.

The festival offered many activities. One could enjoy local entertainment while shopping for a variety of items.

Many craft and other items from paintings to personalized dog treats were for sale.

Along with the personal items, there was also a great deal of choices of food to eat like hamburgers and tamales.

There was also a different addition to the festival this year with a booth dedicated to The Garden of Angels, Inc. This is a corporation that educates expectant mothers.

A new law that has been adopted by many states allows parents to anonymously relinquish their babies within the first 72 hours of birth to designated hospitals, fire or police stations.

In November 2002, The Garden of Angels, Inc. started to collect donations for “safe surrender.”

The booth at the festival was set up to inform people who did not know about the law and also give them an opportunity to donate to the corporation.

Patrice Cianciosi, member of the board of directors for The Garden of Angels, Inc., said that the corporation is a final resting place for abandoned and unclaimed children.

Music and a scarecrow contest completed the festival.