By Amy Babin, Jonathan Corral on December 5, 2003 in Basketball, Sports 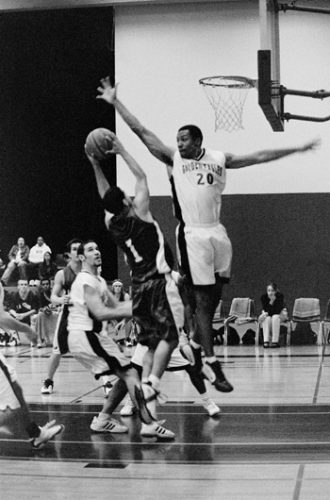 Steve Nichols of La Sierra University blocked Mike Aguila’s shot in the second half of the Tuesday night game. The Leopards plucked the Eagles 90-69 at the Riverside court. / photo by Amy Babin

A brand new year is here for the men’s basketball program and with the team the University of La Verne has, it is going to be an exciting one.

The Leopards also welcome new head coach Gabe Duran, who begins his tenure with great optimism towards this season as well as the future.

“As far as team goals are concerned, our goal every year is to win the SCIAC,” Duran said. “If we do that, we get an automatic bid in the NCAA Tournament.”

Leading the team is returning All-SCIAC honoree Marc McCoy, which gives the Leopards a formidable one-two punch in the back court with McCoy and sophomore wingman Jason Greenlee.

McCoy led the Leopards last season in scoring, averaging 14.2 points per game as well as leading SCIAC in three-point field goal percentage. McCoy finished the year 45 for 90 for an outstanding 50 percent beyond the arc.

Greenlee will also provide the Leopards another scoring threat as he returns with a 13.2 scoring average as a freshmen, second only behind McCoy. Greenlee also led the Leopards in three pointers with 49 made during the season.

“I think our guard play will be very solid and be a key for us in our success as a team this year,” head coach Gabe Duran said.

The Leopards finished last year’s campaign with a 16-9 overall record and a conference mark of 6-8.

With all of the hard summer practices behind them, the Leopards are anxious to get things started with games against teams other than themselves.

The battle with the UCSD Toreros was a defensive struggle as both teams were held to under 50 percent shooting the entire game with the Toreros at 43 percent and the Leopards 40 percent.

The Leopards were sparked by point guard Steve Rugg, who finished with a career-high 28 points on 8 for 19 shooting, 14 of which were from beyond the arc.

Also turning in an outstanding game was Greenlee, who finished with 14 points and seven rebounds.

The teams battled in tough defense to a 41-40 halftime score.

“I was extremely pleased with our defensive effort,” Duran said. “We did a pretty good job on the defensive end of the ball and we also rebounded the ball well.”

Down the stretch the Leopards made key defensive stops and capitalized on offensive plays that ultimately propelled them to the victory over UCSD.

After a rough contest with the Toreros, the Leopards had a relatively easy time with West Coast Baptist as they used balanced scoring and excellent team defense for the victory.

In the game against West Coast Baptist Tuesday, the Leopards had five players score in double figures for their offensive explosion with 52 first half points that quickly shut the door on the Golden Eagles.

Greenlee led the charge with 17 points to go along with eight boards. Rugg chipped in with 15 points, McCoy finished with 14, the always dependable Terrell Langston finished with 13 points on five for five shooting as well as a rebound short of a double double and sophomore guard Marc Holmquist threw down 12 points.

With the huge 52-34 halftime lead, the Leopards threw it into cruise control and did what they pleased with West Coast Baptist in route to their 89-72 victory.

With their confidence growing with each game and practice, the Leopards made it three for three on their home court when they dispatched Chapman University again with great offensive production in their 87-82 victory Nov. 29 at the Supertents.

For the second straight game the Leopards had five players score in double figures spearheaded by Greenlee with 18 points, followed closely by Langston and McCoy who added 16 and 15 points, respectively.

The Leopards did a number on the defensive end against Chapman Nov. 29, holding the Panthers to 40 percent shooting while they knocked down 52 percent of their shots.

In their fourth straight win, the Leopards easily took care of La Sierra as again they used balanced and a swarming team defense.

The Leopards moved the ball around plenty as they had six players score in double figures. Greenlee, Rugg, Donte Witherspoon and Mike Aguila each scored 12 points and forwards Langston and Victor Reynolds contributed with 11 and 10 points, respectively.

On the defensive end, the Leopards were superb as they held the Golden Eagles to 43 percent shooting while they shot 54 percent for the game and pulled down a whopping 51 rebounds compared to 35 for La Sierra.

Other good news for the Leopards was guard Rugg was named the SCIAC Male Athlete of the Week for his early season success.