By Amy Babin, Jonathan Corral on December 5, 2003 in Intramural, Sports 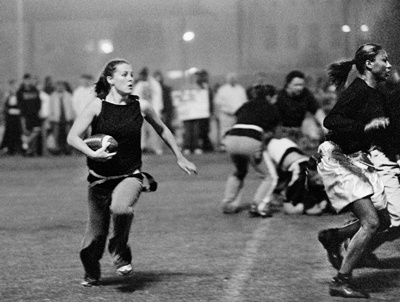 What was supposed to be a fun-filled night full of laughs quickly changed as the whistle blew for the opening kickoff of the Powder Puff football game.

The game, which was sponsored by the Office of Housing and Residential Life, could have been predicted just by the way the two teams entered the stadium.

The seniors and freshmen, who called themselves Times Two, entered Ben Hines Field letting everyone know they were there, jumping and screaming their way onto the field, to the sounds of Brian Ortega, who served as the host and DJ.

“As a team we wanted to come in really pumped up and ready to have fun”, said freshman Jessica Baker. “I personally had a lot of fun, and I can’t wait until we play again.”

The sophomores and juniors, also known as Team Dynasty, entered in a more subtle way, just jogging and minding their own business.

Right from the get go, Times Two looked liked they wanted it more as they used countless running plays and even some trick plays to take the 14-0 first quarter lead.

Team Fantasy could get nothing going with their offense as they were up against a very determined defense that didn’t allow them past midfield for almost the entire game.

“I still can’t believe how organized and how well they played,” said Ralph Moreno who was one of many spectators. “Some of the plays they ran were awesome, and it was extremely fun to watch.”

Throughout the game, Times Two clearly dominated in every facet on the field, but the whole point of the game was to have a fun and mingle with fellow students.

In only its second year of existence, the Powder Puff game is continuing to grow more and more popular with the students as well as some of faculty at La Verne.

“I think it is real entertaining to watch, everybody gets real into it,” said Joyce Gutierrez, a sophomore business major.

“It would be cool if we had a coed game as well,” she said.