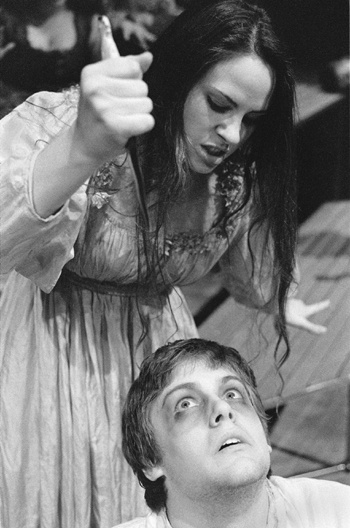 Stephanie Barraco performs as Charlotte Corday in her final visit to murder Jean-Paul Marat performed by James Darrah. Barraco and Darrah take part in the rendition of “The Persecution and Assassination of Jean-Paul Marat as Performed by the Inmates at the Asylum of Charention under the direction of the Marquis de Sade” that will run through Feb. 14 in the Dailey Theatre. / photo by Blanca Rocha

For its first production of the new year, the Department of Theatre Arts has pulled out all the stops with its version of “The Persecution and Assassination of Jean-Paul Marat as Performed by the Inmates of the Asylum of Charention under the direction of the Marquis de Sade.”

If this is a glimpse of what’s to come, ULV is in for a treat this semester.

“Marat/Sade” opened last week in the Dailey Theatre, with final performances at 7:30 tonight and Saturday.

It is a play within a play. The audience watches as the imprisoned patients at the Asylum of Charention become characters in de Sade’s play about two revolutionaries who have differing views on how to obtain freedom from oppression by the French royalty of the late 18th century.

“Marat/Sade” is based on facts. German dramatist Peter Weiss wrote the play in 1964 about the assassination of revolutionary leader Marat.

The play is set in Napoleonic France of 1808. De Sade stages a play for the asylum’s director that he scripted about the failure of the French Revolution and his views of killing and independence as they differ from Marat. He casts the insane inmates in the roles as a kind of therapy for the patients; their reactions to the production show the effect the revolution had on them.

The many nuances of this play came together on stage in a captivating way.

Cast members portrayed their inmate characters so well that the audience was forced to see the terrible condition of incarceration and oppression.

Jolting and twitching movements, great makeup effects and tattered clothes provided an understanding of the physical torture that the poor and voiceless masses suffered following the French Revolution.

The frequent, shrill outbursts of the patients for freedom spoke to the emotional hardships and also brought ideas of similar conditions happening in modern times.

“We want our rights and we don’t care how! We want our revolution now!” chanted Kimberly Reed, Zach Johnson, Max Zänker and Sara Kirk throughout the play as the Quartet.

The talented cast is led by Christopher Smith as de Sade, James Darrah as Marat and Stephanie Barraco as Charlotte Corday, the woman who killed Marat. The quality production no doubt mirrors the quality of Weiss’ original, performed by the Royal Shakespeare Company.

Smith’s monologues and debates with Darrah were among the play’s most powerful moments. The actor easily brought the needed strength to the powerful dialogue along with an impressive commanded of the stage.

This is the kind of production that needs every mark to be met and each detail to come together for it to be a forceful and meaningful tale and the theatre department achieved this thoroughly.

From the haunting songs of Barraco, to Anthony Guerrero as the Herald who wittily coaxed the audience into drawing the connection between the events of the late 1700s and modern time, the play was a huge hit.