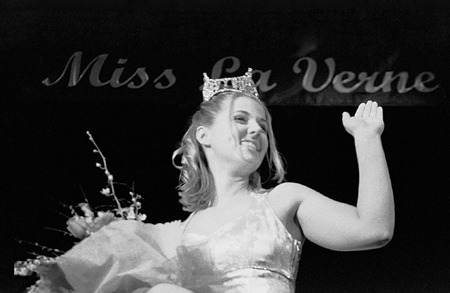 Sarah Davis, a ULV junior, was crowned Miss La Verne 2004, Saturday evening in the Dailey Theatre. Davis showcased her athletic and gymnastic ability by performing a dance routine filled with moves from both classical dance and jazz dance. Many of the dance moves that she executed can be seen in professional gymnastics performances. / photo by Desiree Quintero

“I was expecting to receive another envelope,” said La Verne Mayor Jon Blickenstaff before he re-announced Erin Zabarnick as the runner-up to a shocked crowd. Seconds before, he had announced the new Miss La Verne Sarah Davis as the runner-up.

With another year of confusion in the final dramatic moments, judges crowned Davis as Miss La Verne last Saturday in the Dailey Theatre at the University of La Verne.

Davis came out on top of the nine contestants competing for the honor. “I did not expect to win Miss La Verne,” she said. “I did it just for fun.”

Blickenstaff expected to receive two separate envelopes with the names of the winner and the runner-up, but received only one with two names.

Even though the rest of the event ran smoothly, its conclusion left a disorganized impression on the audience.

Six judges, most of whom are local to La Verne and surrounding areas, chose the winner.

Five of the nine contestants were from the University: Davis, Zabarnick, Sandy Fernandez, Glennda Bivens and Sylvia Castellanos. The other participants were Christina Boland, Kim Grissom and Bonita High School students Natalie Wilson and Erin Estrada.

Each gave a tremendous performance in the opening dance routines.

The first category was the lifestyle and fitness competition. In it, the contestants strutted their stuff in bathing suits while being judged for the same features as Miss America. These criteria included first impression, confidence, overall fitness and health, proportional physique and grace.

As the night’s entertainment, Deena’s Dance Center of Pomona provided a skillful dance number to “All That Jazz.”

For most of the women, the skill competition was by far the most exciting competition of the night. Zabarnick’s monologue, Fernandez’s violin rendition of a classic Mexican song and Davis’ choreography helped bring the audience into the world of each contestant.

Along with the recognition as Miss La Verne, each contestant also competed for scholarship awards. Last year’s Miss La Verne, LaKia Sims, kicked off the second half by introducing the visiting queens from the surrounding cities.

“I think that it is going to be tough for me to give it up because it has been a rough year for me, but I am so excited for the new girl,” she said.

The next competition featured evening wear. The participant’s gowns stole the spotlight and left the audience awestruck.

Rounding out the competitive events, the contestants answered a series of questions about topics like censorship, immigration and fitness.

“It’s a really big experience in their lives,” Blickenstaff said. “In that they get experience, poise, character, camaraderie – a lot of things that translate directly to life – no matter what they do.”

The pageant was near its conclusion when Sims sang “Hero” by Mariah Carey. As she gave her farewell speech to the contestants and expressed gratitude for the opportunities that her title had given her, the stage filled with emotion.

“I must admit that this journey has not been easy, but despite the trials and tribulations that I had to face, I still have a reason to be thankful,” Sims said.

Along with crowning Davis, the judges recognized Zabarnick as runner-up.

Davis said she had no time to celebrate because of a cheerleading competition the next day.