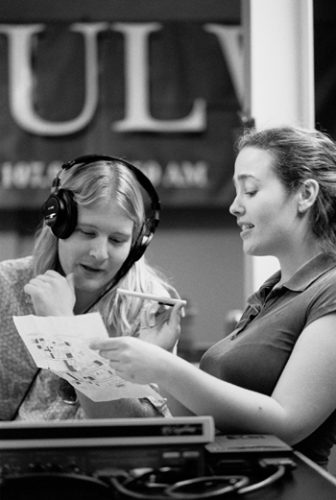 Brian Juliussen, music director for KULV, and Sara Kirk, assistant music director, discuss Tuesday’s “Battle of the Sexes” questions for their lunchtime radio show. During “Battles of the Sexes” one female and male contestant call in to be questioned about the opposite sex for a prize. “The Brian and Sara Show” airs every Tuesday, Thursday and Friday from 11 a.m. to 1 p.m. at 107.9 FM. / photo by Sylvia Castellanos

As a year winds down, seniors Brian Juliussen and Sara Kirk are serving up offbeat humor three times weekly on KULV’s “The Brian and Sara Show.”

Juliussen, a broadcast major, and Kirk, a communications major, developed the show by themselves as their senior project.

“Each day we try to have a new subject to talk about,’’ Juliussen said.

A popular segment is Tuesday’s “The Battle of the Sexes,’’ where men and women call in and Juliussen and Kirk ask questions about things the opposite sex would or should know.

“This is not the first time that students have done something like this, but it is the first of this format,” said Michael Laponis, professor of communications and the students’ project adviser.

On Thursdays Juliussen and Kirk stir up mischief by prank calling random people and businesses in the La Verne area.

Every Saturday and Sunday Juliussen and Kirk go out to public places and ask people random questions about government, politics and other topics for their “Dumbing of America” segment.

They have interviewed University of La Verne students, as well as people in Claremont and at the Ontario Mills shopping mall.

On Fridays Juliussen and Kirk air and discuss and often make fun of the answers they get.

For Juliussen, the reward is making people laugh.

“The ability to reach people, entertain people, the comedy and getting people familiar with the comical point,” he said.

“What I enjoy most is the entertainment part of this show,’’ Kirk added.

Kirk’s hope after graduation is to travel and find a job as a talk show host.

If that doesn’t work out, she would like to get into marketing or promotions.

Juliussen hopes after graduation to stay on with KFI or KALC where he is currently interning, or to go to another station in California. He said his goal is to just be on the air.

“I really like the Brian and Sara show, I like the selection of music they play,” said sophomore Erica Pembleton.

“Brian and Sara are doing a fine job on air, they are trying to create a lot of visibility and events to cover,” Laponis said.