By Caroline Franke, Chrissy Zehrbach on March 19, 2004 in Sports, Volleyball 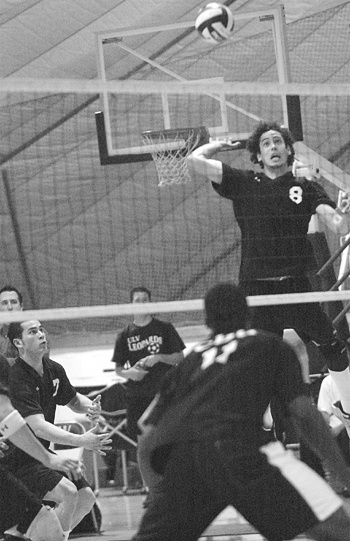 Freshman Jarrett Day (No. 8) of the University of La Verne men’s volleyball team goes up for an attack against the Cal Baptist Lancers Friday night in the Supertents. Day collected nine kills for the Leopards in the match. The Leopards were defeated, 3-1 (30-19, 30-14, 27- 30, 30-27), by the No. 1 NAIA. It was the Leopards’ second loss to the Lancers this season. / photo by Caroline Franke

With the score tied at 28 in game three, Elliot Naito put away a kill that sent the University of La Verne men’s volleyball team to game point. Cardinal Stritch University pushed ULV to a 30-30 tie before the Leopards could put away two straight points to wrap up the game and take the match, 3-0 (30-28, 30-24, 32-30).

“We were the better team,” head coach Morgan Coberly said. “I felt confident that even if we lost that game we’d win the match.”

The Wolves (11-8), a National Association of Intercollegiate Athletics team, gave ULV a tough run throughout the match, kicking it up a notch in the third game.

“It’s not about the win for me, it’s about them giving their best effort,” Coberly said. “We didn’t give that until the end.”

In the match, sophomore outside hitter Matt Cornell recorded 17 kills for the Leopards, registering a .519 hitting percentage. He also had two service aces.

“(Day) picked it up offensively tonight,” Coberly said. “We moved him to the right side since Dwayne’s been injured and he looked good.”

Junior outside hitter Dwayne Wibeto suffered an injury to his left hand in game one of ULV’s win over Lees-McRae College March 8 and has not returned to the line-up, but his teammates have stepped up to fill his spot on the court.

“We’ve had a couple guys come off the bench and have played really well,” Coberly said.

“They bring a lot of enthusiasm off the bench,” Cornell said. “Ben (Paine) especially, fires up the fans as well as the team.”

The win over Stritch marks the Leopards’ second consecutive this week, earning them their first two-game winning streak of the season.

“We don’t play a lot of Division III teams. This shows you where we are on a national level,” Coberly said.

After a slow start in game one, the Leopards found their rhythm and dominated the match. Hitting a season-high .459 in the match, ULV put away 42 team kills in the match, holding the Gulls to only 25 kills and a -.026 hitting percentage.

Cornell led the Leopards, contributing a game-high 12 kills and registering a .476 hitting percentage. Junior Elliot Naito followed closely behind, chipping in 11 kills on 19 attempts with only one error to hit an impressive .562 in the match.

Defense has shown to been ULV’s weakness this season, but the Leopards have brought it up a level in recent competition.

“Our main focus in practice is defense and it shows on the court,” Cornell said.

As a team, the Leopards collected 11.5 blocks, allowing the Gulls only one block by picking up 25 defensive digs.

ULV also stepped up its game last Friday night against Cal Baptist University although the Lancers, No. 1 in NAIA, handed the Leopards a loss for the second time this season.

After dropping the first two games, ULV picked up its intensity in the third game, postponing the Lancer win.

An attitude change was obvious on the court as the Leopards began to cheer more vocally after each point, fueling each other with energy.

“Those last two games… we haven’t played with that kind of energy. That’s what we’ve been looking for all year,” Coberly said. “It’s not anything technical that we did. The team decided to play with energy.”

Sophomore middle hitter Ben Paine was the ring-leader Friday, yelling and pounding on his chest after each good play.

“We have, unfortunately, been a quiet team and he’s one of the few guys who brings a lot of energy. He gets the guys and the crowd into the game. It’s a lot of fun,” Coberly said.

“I just yell; that’s all I do. People do with it what they want. They get mad at me or they use it. I’m here for the fans,” Paine said.

Cornell and Day contributed 15 and nine kills in the match, respectively. Naito also had seven kills in the match and Estrada put away eight. But as a team, the Leopards could only muster a .140 hitting percentage.

The Lancers (14-2) earned their victory hitting .283, spearheaded by opposite Shamsu Awudu, who tallied 16 kills in the match. Ironically, although the Lancers recorded a higher percentage, the Leopards collected 27 defensive digs while the Lancers trailed with 26.

“They bounced a lot more balls than they did last time. They came out to play; some went our way and some didn’t,” Paine said.

ULV (6-10) maintained a No. 4 national ranking this week, while their West Coast rival University of California Santa Cruz was bumped up to No. 2 after Springfield University suffered a 3-1 loss to No. 7 New York University and was knocked down a position in the rankings.

“Our backs are against the walls because we lost to Santa Cruz, we need motivation now,” Paine said.

The Leopards’ final game of a five-game homestand will be played at 7 p.m. Tuesday in the Supertents against Hope International University.