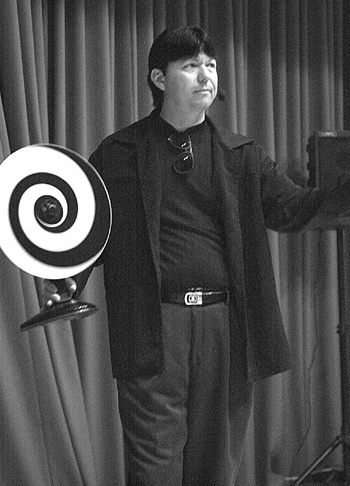 Hypnotist Michael Mezmer uses the Archimedes Spiral to hypnotize a group of University of La Verne students. Mezmer has been a credentialed hypnotist since graduating from the Hypnotism Training Institute of Glendale in 1992. Mezmer initially completed 500 hours of training before graduating and completes an additional 30 hours a year in order to keep his credential. / photo by Blanca Rocha

On Wednesday the University of La Verne was treated to an entertaining and informative performance by world-renowned hypnotist Michael Mezmer.

Dressed in black from head to toe, Mezmer ran onstage completely ready to thrill those in the audience with his knowledge of hypnotism.

Although hypnotism may receive a lot of flack form skeptics, Mezmer ensures everyone that whether it is realized or not, they each receive some sort of hypnotism throughout his or her daily routine, either in the form of daydreaming or what is referred to as “highway hypnotism.”

“How many of you will be driving somewhere, get off your exit and realize, you don’t remember that last 10 or 15 miles?” Mezmer asked the audience. Hands across the room went up.

Sponsored by the Associated Students Federation Forum, this performance proved to make for a good laugh as 14 volunteers from the audience took seats on the La Fetra Hall stage, prepared to let their self-consciousness flow and let the suggestions of Mezmer take over.

Mezmer began by explaining the benefits that hypnotism can produce, such as better sleep, more energy and greater confidence.

The seven women and seven men sat patiently in their seats, concentrating deeply on Mezmer and every word uttered.

“I’m not hypnotizing anyone,” Mezmer spoke to the volunteers. “You are going to hypnotize yourself.”

Although Mezmer appeared to be in control, he assured the audience and the volunteers that hypnotism is completely self-controlled and voluntary.

Mezmer then began his performance. Several of the initial volunteers were asked to leave the stage, because as Mezmer said, it just was not their day to be hypnotized.

After continually reminding the remaining volunteers to concentrate and block out any distractions, the final group of nine were slipped into a state of deep hypnosis where they were asked to imagine themselves as members of an ivy league drumline, victims of rancid bean burritos and belly dancers for Latin superstar Shakira.

The volunteers were then slipped into the post hypnotic portion of the show, where their confidence was boosted as they imagined themselves as Christina Aguilera and members of her band.

“I don’t remember anything,” said senior Nasir Najieb, who at one point graced the stage as a male dancer for Christina Aguilera.

“He introduced us, and that’s all I know. It was really interesting and fun,” Najieb said.

Mezmer said that while most who get hypnotized remember everything, there are a few who sometimes go so deep they cannot recall anything that happened in their hypnotic state.

“I was skeptical at first,” said Ana Jimenez, a sophomore liberal studies major. “But after seeing this, I think there really is something behind it.”

Mezmer, who graduated from the Hypnotism Training Institute of Glendale, Calif. in 1992, has traveled all over the world as a hypnotist and entertainer.

His shows encourage people to laugh, have fun and enjoy themselves, while building confidence onstage.

“You feel good doing it. The more you do it, the better you feel,” Mezmer said.