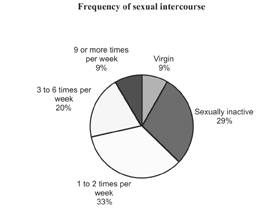 Although a majority of University of La Verne students’ sex lives are impacted by their academic demands, more than two-thirds say they are satisfied with their level of physical intimacy, according to a recent poll conducted by the Campus Times.

Of the 35 students polled, 55 percent indicated that their academic demands negatively impacted their sex lives.

Senior Derek Wendt said that although he is overall satisfied with his sex life, the end of the term has an impact.

“It used to be once or twice a day, that was cool,” Wendt said. “But I’m a sex freak. During this month, a lot is due like finals and senior projects.”

The 18 female and 17 male students were polled on the frequency of which they had sexual intercourse, their number of academic units this semester, whether or not they were satisfied with the frequency of sexual activity and whether their demands as students impacted their sexual habits.

Those polled ranged from academic loads of eight to 18 units, with an average of 15 units taken this semester. As a group, they had sex an average of 2.4 times per week.

Although there was not a statistically significant correlation between unit load and satisfaction, several students cited other factors such as employment.

Significantly more women expressed dissatisfaction with the frequency of their sex lives than men. Forty-four percent of female respondents indicated they did not find their sex life satisfactory compared to 29 percent of male students.

Some Leopards said they are waiting for the right partner.

“I’m not sleeping around,” said David Vong, senior business administration major. “I’d like to have a serious girlfriend.”