By Steven Falls, Veronica Garcia on September 24, 2004 in Soccer, Sports 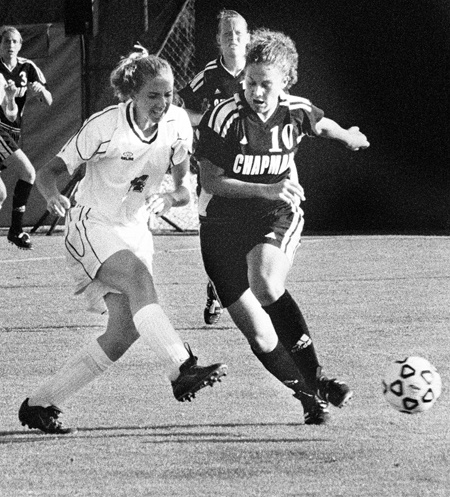 Sophomore forward Katie Ford of the University of La Verne women’s soccer team tries to score against sophomore defender Ashley Davisson of Chapman University. The Leopards were hunted down by the Panthers, 5-0, at Ben Hines Field on Saturday. / photo by Veronica Garcia

Alyce Perry, Chapman’s eighth highest scorer in school history, put the Panthers on the board six minutes into the game, assisted by a beautiful cross field pass from teammate Sarah Barton.

ULV sustained many Panther attacks from this point, but with 14 minutes remaining in the half, Chapman midfielder Breanne Crowley scored to stretch the Panthers lead to 2-0. The Panthers added two more goals in the next five minutes to extend the already comfortable lead to 4-0, a lead they would take into halftime.

The Leopards seemed unable to form any kind of offensive attack against the Panthers throughout the entire first half. Chapman seemed quicker to all loose balls, and set the tone early for the entire game to come.

“They were aggressive to all 50/50 balls the entire game. I’m not really sure why we were so timid,” said ULV senior defender Noelle Feesago.

“We played like we never went to practice all pre-season,” head coach Wendy Zwissler said.

The Panthers’ Simi Phull increased the lead to 5-0 with 3:34 to play in the second half on a penalty kick after she was fouled in the 18-meter box by a ULV defender.

“They seemed to struggle here and there, but they are a good team, so I think you really have to give our defense a lot of credit for putting them in the position that we did,” said Chapman senior defender Sarah Barton, who finished the game with one goal and one assist.

The loss dropped the Leopards to 1-4 on the season. Nationally ranked Chapman improved to 5-0 on the year.

Afterwards, the mood of the team seemed humble but uplifting.

“It just seemed like everyone on the team had an off day, all on the exact same day,” Feesago said. “A lot of it is mental with us as far as this game goes. Our communication was kind of slacking.”

The Leopards look to improve in certain areas as they enter the tough Southern California Intercollegiate Athletic Conference play.

“Until we learn to defend and take shots on goal, it could be a very long season,” Zwissler said. “I do think that when we play to feet, we are very powerful.”

“We need to just learn from this game. We know where we can be and where we should be,” Feesago explained. “I’m not worried.”

Chapman was a final tune up game for ULV as it opened up SCIAC play on Wednesday against Pomona-Pitzer (1-3-1 overall, 0-1 conference) at Ben Hines Field. The Leopards dropped a 1-0 decision to Pomona-Pitzer in overtime.

“I expect Pitzer to be sly; they can spoil anyone’s day,” Zwissler said prior to the game.

Pomona-Pitzer dropped its opening SCIAC match, 2-1, to Redlands on Saturday.

Concluding the opening conference match on Wednesday, ULV will travel to Redlands tomorrow for another SCIAC match.

Steven Falls can be reached at sfalls21@msn.com.

Summer school proves too pricey for most
Can’t live with ‘em, or without