By Adam Omernik, Campus Times Editorial Board on October 29, 2004 in Editorials, Opinions 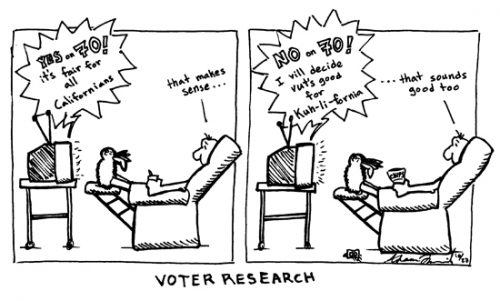 This year’s election is said to be the most important election in voter history. Aside from having to decide whether Bush or Kerry will run our country, we as voters also have the difficult task of deciding which propositions should pass. The following are Campus Times’ endorsements.

This proposition calls for the protection of local taxpayers and vital local services. It would prevent the state legislature from taking away allocated government funds. The protection of vital services includes police, fire and paramedic response, healthcare, parks, libraries and transportation. And it keeps local tax dollars local.

Voting yes on Proposition 59 allows California citizens access to increased government information. Rather than being able to disclose information from the public, a government member would have to explain exactly why the information needs to be kept secret. This is an important step to move California toward becoming a more open state government like Florida, raising to the constitutional level people’s right to an open government.

Proposition 60 protects voter choice guaranteeing that the top vote-getter from the primary election would advance to the general election. With the passage of this measure, full, free and open debates in elections would be allowed. Also voters will be able to choose their political party nominees from any party. Passage of the proposition would allow voters to not only receive enough information from all sides of those running for election, but also allow for voters to distinguish between different parties and make the decisions they want without being tied to a certain party.

Proposition 60A would call for sale proceeds of most surplus state property to pay off specified bonds. This proposition states that in the long term the state would have an overall net savings. However, the state could spend the money in other places that are more needed. There is no reason to lock the state into a commitment with this proposition.

Proposition 61 calls for the authorization of 750 million dollars in general obligated bonds for grants to eligible children’s hospitals for construction, remodeling and renovations. An enormous amount of money? Yes. For a good cause? Absolutely. A “yes” on 61 qualifies the children’s hospitals for necessary modernization and expansion needed for the best care of children.

Proposition 62 proposes changing the primaries so voters may vote for any state or federal candidate regardless of party registration. The two candidates, regardless of party affiliation, who receive the most votes will be listed on the general election ballot. A “no” would assure that each party’s primary winner appear on the November ballot – uphold the current process and protect third party candidates.

Yes on Proposition 63 would tax 1 percent on people with taxable incomes above $1 million. Tax dollars would be used to fund expanded health services for mentally ill children, adults and senior citizens. By voting “no” on the measure, the money needed to keep these institutions running would come from actions by the Legislature and Governor, an unclear path. A “yes” will put more funds into the treatment of those in need while also ensuring the funds are coming from the areas where money can be spared.

Proposition 64 would allow individual or class action “unfair business” lawsuits only if actual loss was suffered. Only government officials may enforce these laws on the public’s behalf. A person should be allowed to bring a lawsuit under an unfair competition law without having suffered injury or loss of money or property.

A “yes” would require the Governor to annually publish a list of the chemicals known to cause cancer or reproductive toxicity. We have a right to know what we are in contact with on a day-to-day basis. It can only do good.

A “yes” will restore the original intent of the Three Strikes Law by eliminating the imprisonment of many who are serving extraordinary jail time for petty offenses. Currently the law’s third strike, meaning up to 25 years to life behind bars, is applicable for crimes not violent or serious. A “yes” would save the taxpayers billions of dollars and would keep the three-strike rule intact strengthening it where it is needed, not for petty crimes.

The proposition would increase telephone surcharge and allocate other funds for emergency health care. With such high taxes in the state of California the last thing we need is another high tax on telephone usage. While the limit is 50 cents per bill there could be unlimited taxation on cell phone bills. Also, less than one percent of the funds will be directed towards 911 services. Even emergency service employees and seniors oppose this proposition.

Proposition 68 calls for Indian casinos to pay their share in taxes. A “no” vote on this measure would ensure that slot machines would not be authorized at 16 different race tracks and card rooms throughout the state and that current tribal compacts with the state would be upheld. A “yes” on this measure would allow for existing card rooms to expand which would cause more traffic and crime near residential neighborhoods and schools.

Proposition 69 would require the collection of DNA samples from all felons and others arrested for or charged with specified crimes. The DNA would then be submitted to a state-run DNA database. This proposition would help solve crimes by requiring convicted felons, rapists and murderers to submit their DNA. It could also help prevent false imprisonment. The proposition would bring us up to speed with 34 other states already using DNA collection. There is no invasion of privacy here, just some simple DNA samples.

Proposition 70 is a measure in which tribes must contribute a percentage of net gaming income to state funds in exchange for expanded and exclusive tribal casino gaming. A “no” vote would continue the original compacts negotiated by Governor Schwarzenegger. A “yes” vote on this measure would only destroy these agreements.

This is a measure in which the state would regulate and fund stem cell research. Such research would mean opportunities to find cures for diabetes, Parkinson’s, Alzheimer’s and many other diseases with the potential to majorly cut health care costs. The no argument states the proposition could lead to human cloning, but the measure safeguards against this. Spending for further stem cell research is a good investment.

Proposition 72 proposes legislation requiring health care coverage for employees working for large and medium employers. A yes would keep private health coverage within reach of working families. With health premiums rising, it is increasingly more difficult for employees to find affordable health insurance. It would ensure that 1.1 million people currently without health care are without. This proposition would ensure the coverage that California workers need.

Teens get a taste of college
Entering a second childhood