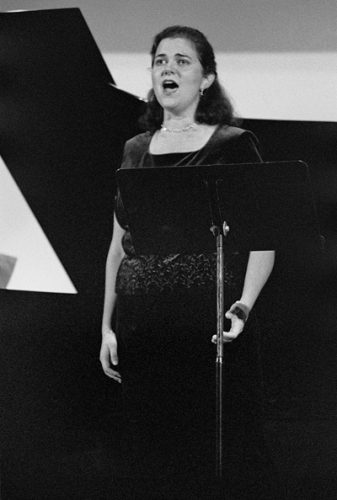 From “Ave Maria” to “Sometimes I Feel Like a Motherless Child” Carol Stephenson, part-time ULV music department faculty member, sang a variety of songs celebrating faith. Stephenson, a private voice coach, along with Timothy Durkovic, a pianist and “Artist-in-Residence” at ULV, presented Music of Faith in Founders Auditorium Friday. / photo by Veronica Garcia

There was music in the air last Friday night when two University of La Verne faculty members from the music department put together their annual concert with a spiritual theme: “Music of Faith.”

Soprano Carol Stephenson and pianist Timothy Durkovic based the title on the selection of the music: The line-up was based on stories from the Bible.

They were all performed in chronological order through the Nativity of Jesus Christ.

“There is such a vast amount of religious music,” Stephenson said. “We thought that we could put together a really nice program that was more like concert music than just something that you would hear in a church … or a temple service.”

Stephenson and Durkovic’s performance did such a beautiful job, it took the breath away from audience members who just sat back and listened. One didn’t need to be religious to enjoy this show.

“We were trying to find a theme for the program and so we decided to do a sacred and kind of religious-text theme,” Durkovic said.

Stephenson has been teaching private voice lessons and voice workshop classes at ULV for the past two years.

She is an experienced performer with bachelor’s and master’s degrees in music from the University of Southern California. She has performed with many choirs around the Los Angeles area and is currently a choir member at the Church of Good Shepherd in Arcadia, for the Temple Shalom for the Arts in Beverly Hills and at St. Luke’s Episcopal Church in Long Beach.

Durkovic is currently serving as artist-in-residence and the coordinator of the Keyboard Studies program here. He was born and raised in Guatemala City and has been playing the piano since age 5.

Durkovic earned his bachelor’s degree at the age of 17 from the Conservatory of Music in Guatemala and earned his master’s of music degree from the University of Southern California, Thornton school of Music. He has traveled the world performing in recitals and as a soloist.

These two were clearly meant to perform together.

During the concert, there was never a moment when they did not seem in sync.

“It was almost like closing your eyes and playing a CD,” said Hassan Webb, an attendee from Cal State Fullerton. “They performed as one and felt each other’s emotions.”

The concert began with the beautiful and famous song, “Ave Maria,” and continued with many different types of “Alleluia.” The ending of the program was what caught everyone’s attention. Stephenson and Durkovic also performed spiritual music, which originated from enslaved Africans in the farmlands of Colonial America.

“We couldn’t have left the spirituals out, because we knew that those would move the audience the most and they were moving us as well,” Stephenson said. “It is something that you really (relate to) and with some deep feeling and with your faith and your relationship with God, and we wanted to make sure that that was part of what we represented tonight.”

This concert could not have ended any better. There were a couple of surprise finale songs, but most of the spiritual songs were written by Moses Hogan. They included: “My Good Lord’s Done Been Here,” “Give Me Jesus,” “Deep River,” “Sometimes I Feel like a Motherless Child” and “Walking Together Children.” Each one of these songs brought the audience to tears.

Melissa Rodriguez can be reached at mrodriguez2@ulv.edu.