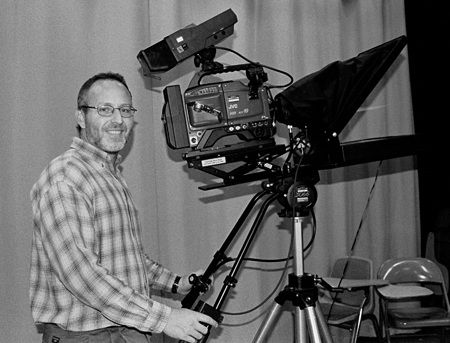 His education did not lead him directly to his dream job. After receiving his MBA, he worked for a year on Wall Street and absolutely hated it. He spent the next four-to-five years working as a consultant for Fortune 500 companies before deciding to try his skills at his childhood dream: producing film and television.

“I did what everyone else told me to do,” Inderbitzin said. “I did the safe thing and got a good education that led to a good job – which, by the way, is the most horrible advice ever.”

His advice: “Carve out a way to make your dream job work for you. It’ll be hard work, but you’ll be so much happier.”

With ambition and his wife-to-be, he headed for Los Angeles. There, he mainly wrote and/or produced movies for television, which aired on NBC, ABC, CBS, USA and Lifetime. He has also worked as a writer consultant for TBS’ first original series, “Bull,” and was president of Abandon Pictures, a company that has produced such movies as “Oxygen” with Adrien Brody and “Scotland P.A.” with Christopher Walken.

Inderbitzin has always enjoyed guest lecturing at various universities, so when the opportunity for a teaching position became available at ULV, he applied.

“Producing is hard work,” Inderbitzin said. “Teaching is a better long term job and a great way to use my experience as a producer to benefit the students.”

Inderbitzin has several ideas he hopes to integrate into his teaching methods.

“I believe that people only learn if they are entertained,” he said.

Keeping his students engaged is a continual challenge for him as a teacher, but he believes the effort is worth his time.

“I also strongly believe in theory, but at the same time, I’m all about the real world,” Inderbitzin said. He believes learning theory and a real world perspective are both essential to acquiring the skills needed to succeed in the industry.

“He’s really dedicated and wants us to work hard,” said Mary Ann Borer, senior broadcasting major. “He really wants to prepare us for working in TV and film.”

Inderbitzin is enjoying his first permanent position in a university setting.

“I’ve always loved the college campus atmosphere,” he said. “[ULV] is an adorable little college. It kind of reminds me of Andy Griffith’s Mayberry – it’s great.”

“I’m so impressed with the quality of equipment here in the communications department,” he said. “It’s even better than some of the larger schools.”

Of all the benefits that ULV has to offer, he does have one complaint.

“It seems that students work too much. It’s frustrating that some students have to work 40 hours per week to pay the bills; their school work suffers because of it,” Inderbitzin said.

As a graduate student at the University of Chicago, Inderbitzin worked the graveyard shift as a bellman at the Chicago Marriott.

“It was totally brutal, but I got through it.” Inderbitzin said. “I got five to six hours of sleep each night and I worked it in around my schedule.”

Inderbitzin believes that having a flexible attitude in the workplace is key to a successful career.

“Have an attitude that accepts the instability of the economy,” Inderbitzin said. “Career moves may be positive or negative, but the successful are those who can adapt.”

“He’s really good and he knows the industry really well,” said Arleen Lopez, senior broadcasting major. “I worked on several productions this summer and everyone in that industry is very stern and to the point. I’m really glad to have him as a teacher.”