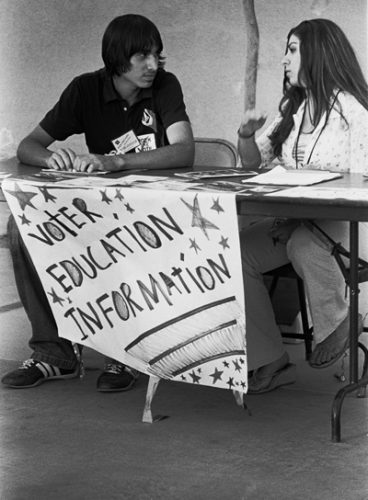 Mario Rosa and Yasmin Diaz are members of the Pomona Youth Commission that put on a Rock the Vote Rally on Second and Thomas streets in downtown Pomona. Geared toward youth in the surrounding areas, the event provided opportunities for voter registration, education, information and a practice voting area. Visitors were drawn to the event by local DJ’s and bands. / photo by Veronica Garcia

Downtown Pomona’s Thomas Street Plaza was the place to be last Saturday night, as local young musicians and their peers came together for a worthy cause.

That cause was “Rock the Vote,” the non-partisan nationwide campaign designed to entice youth of voting age to get out and exercise their most valuable right. The rally, officially branded as the First Annual “Rock the Vote Pomona Style,” was coordinated and conducted by the Pomona Youth Commission. Bernardo Rosa, Coordinator for the Pomona Youth Commission, said the kids did almost all the work, from booking the entertainment to printing the flyers. Additionally, during the event, the kids emceed the show and helped answer questions that show goers had about voting.

“There are several myths about young people and voting,” Rosa said.

The aim of this particular rally, and the “Rock the Vote” program as a whole, is to show young people that voting is an important but simple part of being an American citizen.

Rosa summed up the mission like so: “It’s Voter Education 101.”

To accomplish that mission, Rosa and the crew set up five tables along the western edge of the plaza. At those tables, guests could register to vote, register to be a poll worker on election day, get information on voter education and even practice voting in mock voting booths, complete with punch cards, punch card holders and privacy partitions. All such activities were aimed at getting guests of all ages accustomed to and excited about the voting process.

Mayor Edward Cortez was one of the many dignitaries and leaders who voiced their adamant support of the program.

“One of the greatest responsibilities we have as citizens is to ensure that each individual, especially young adults and teens are educated and aware of their rights,” he said.

Of course the primary motive behind most people’s attendance was the live music, and there was plenty of that to go around.

The evening started with a DJ spinning some thumping mixes while the members of the first band, Modified Mercalli, set up their equipment. When the Pomona-based group hit the stage, the boys proceeded to wow the crowd with a set of powerful and original rock ballads.

After Modified Mercalli finished, the crowd got a short intermission before the next act. The DJ spun some more tracks, while tracks of a completely different variety played host to the brute force of Southern Pacific and Union Pacific freight trains every few minutes, as the lengthy leviathans thundered past the Downtown Pomona Metrolink Station.

After the intermission, a local spoken word artist in an undeniably pink sweatshirt took to the stage. For those of you who have not experienced a Spoken Word performance, it is probably best described as a smattering of rapping, poetry, scratching and remixing; a sort of musical cubism, if you will.

Once the spoken word performance ended, the Shaking Hands went up to close out the night. Unfortunately, no sooner had the boys of Shaking Hands finished their first song did a bass string break, with no replacements handy or available. Thus, sadly, the show came to a premature end. Before the band could get to the planned John Lennon tributes to help mark the late Beatles birthday.

Thankfully, the anticlimactic end certainly did not seem to diminish the event’s overall impact. All of the artists urged people to register and vote as soon as possible following their respective performances, and the aforementioned service and information tables had plenty of visitors during the intermissions.

Spectator responses also seemed to suggest the event was a success. A quartet of local high school lads had just left the nearby art show and heard the music, prompting them to come check things out. When they learned of the event’s purpose, they were even more interested.

“But it’s good to get people to vote.”

A group of high school- and college-aged, self-proclaimed Shaking Hands groupies from Huntington Beach agreed that “Rock the Vote’s” quest is about as noble and as vital as they come.

“It’s a really good idea to get the younger generation to vote,” said Carolyn Russell.