By Nila Priyambodo, Veronica Garcia on October 1, 2004 in LV Life 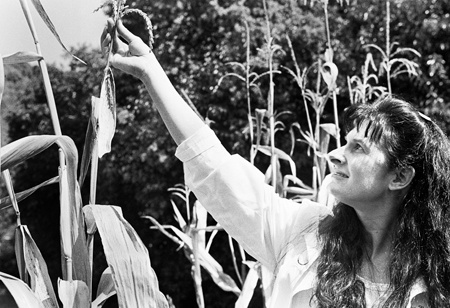 Assistant Professor of Biology Stacey Darling-Novak has supervised cell death research to find out what controls the process of cell death in endosperm tissue in corn. Novak has assisted students every summer for the past four years with their senior projects. / photo by Veronica Garcia

If Associate Professor of Biology Stacey Darling-Novak is successful in determining why some cells in maize (better known as corn) die prematurely, she will be able to create a plant that has a significantly delayed death rate, which will increase productivity.

She has been researching this pathway of programmed cell death from the maize that is grown in the garden behind the Honors House.

“Maize is an important staple crop,” Darling-Novak said. ”The productivity of corn is related to this process of death. By delaying the death in the kernel, we can increase productivity.”

To provide fresh material for the research, two mutants of corn are grown every year behind the Honors House.

“It first started with a seed,” Darling-Novak said. ”In the first year, there were hardly any plants. But now we have our own resource for our research.”

Darling-Novak’s maize research is one of the many research activities conducted by ULV’s biology department that allows students to complete their senior projects.

According to Jeffery Burkhart, professor and Fletcher Jones chair of biology, half of the faculty in the biology department is conducting research, including Associate Professor of Biology Christine Broussard, Professor of Zoology Dan Merritt and Burkhart.

“We are very supportive of all the research activities that our faculty is conducting,” Burkhart said. ”Especially those that put an emphasis on the involvement of students. Stacey’s had as many students complete their senior projects under her in the last two years as any faculty member has. That’s a great asset to our students.”

Jonathan Jarvina – who started his research to determine if sucrose is inducing programmed cell death in maize at the beginning of his senior year – said he found conducting the research with Darling-Novak to be beneficial.

“I think the research is great because not only did I gain vital experience that I believed helped me get into medical school,” said Jarvina, who is currently enrolled in the Ross University School of Medicine. ”But contributing to the science that may one day optimize corn as a better source of food is also amazing.”

Mary Clark, a student who helped raise and pollinate the corn this summer, agreed.

“There are many procedures and instruments that up until then I had only read about in textbooks or seen a picture of,” said Clark, a sophomore biochemistry major at Occidental College in Los Angeles. ”It was neat to watch the results unfold.”

Darling-Novak agrees that the research is beneficial for students, but believes there are minor problems when it comes to conducting the research.

“It’s pretty difficult to just drop everything and do the research,” Darling-Novak said. ”It’s hard for students to take their classes and do research at the same time during the school year. But all we can do is try.”