By Nicole Knight, Veronica Garcia on October 22, 2004 in Soccer, Sports 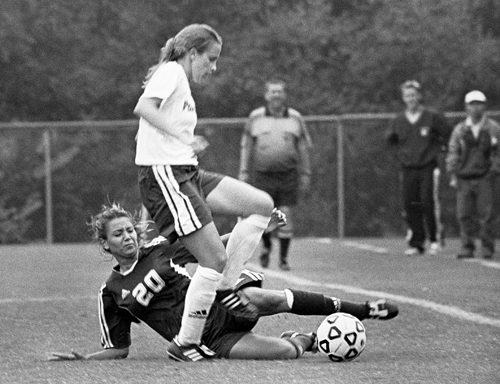 Junior midfielder Nataly Clavel (No. 20) of the University of La Verne tackles the ball from Pomona-Pitzer’s Ashley Hovey (No. 2). The Sagehens defeated the Leopards, 1-0, in double overtime in Saturday’s game, leaving ULV’s conference record at 2-4-1. / photo by Veronica Garcia

The University of La Verne women’s soccer team suffered an upsetting 1-0 defeat to Pomona-Pitzer in double overtime on Saturday in Claremont.

The Leopards and Sagehens stood each other off with tight defense and offense for 100 minutes of playing time.

The teams engaged in an extremely close game, playing as equals in shots and saves. Both teams took an equal amount of 11 shots at their opponent’s goal.

However, Pomona Pitzer got to the scoreboard first, when sophomore forward/midfielder Kate Walker scored in the first minute of the second overtime to end the game.

Pomona Pitzer and La Verne played a highly aggressive game with over 45 fouls and four yellow cards called between the two teams.

“We played with more intensity and came out harder,” Taggart said.

History repeated itself as the Leopards had previously lost to the Sagehens in the Southern California Intercollegiate Athletic Conference competition, 1-0, in overtime.

“We were a lot more aggressive than our last competition with Pomona-Pitzer, but we should have had the ball in the net five times before it came down to the last goal,” ULV head coach Wendy Zwissler said.

The Leopards are currently in sixth place in the Southern California Intercollegiate Athletic Conference standings with a 2-4-1 conference record, 3-9-1 overall.

In the SCIAC season, the Leopards have defeated Whittier (3-2) and Claremont-Mudd-Scripps (5-4).

The team has suffered losses to Redlands (2-1), Cal Lutheran (1-0) and Pomona-Pitzer (1-0). The Leopards also have one tie decision with Occidental College (1-1).

Zwissler has a positive outlook on the second half of SCIAC competition.

To reach their team goals, Zwissler said the team must “not give up, stay together, trust each other, and believe in their ability.”

In non-SCIAC competition, the Leopards were scheduled to face Rhodes College from Tennessee on Tuesday.

However, because of unsafe playing conditions due to the mud and rain, the game was cancelled.

The next contest for the Leopards is scheduled for 11 a.m. tomorrow against Occidental College at Ben Hines Field.

Nicole Knight can be reached at stareknight17@charter.net.

Volleyball falls to rivals in Hayward
Paddling down D Street