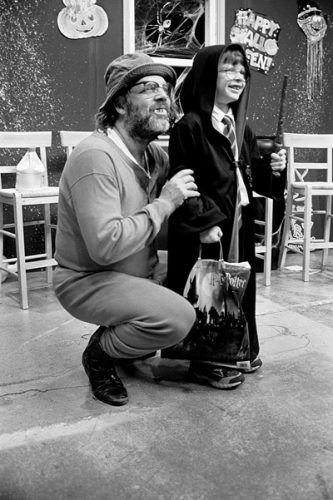 On Sunday children were greeted with tricks and treats when they visited the set of “Halloween Live” at the La Verne Community Television studio in the Arts and Communications Building. Professor of Journalism George Keeler brought his son Nathan Keeler to the set. Billy Bob, played by Don Pollock, professor of communications, has been the host of “Halloween Live” for five years. The show was broadcast throughout La Verne and San Dimas on cable channel 3. / photo by Beatriz Mendoza

Tiffany Louie, a junior, helped run the show for the first time this year by escorting kids and guests on the set.

It was a special treat for children from the neighborhood to drop by in their costumes and visit Billy Bob for some trick or treating on live TV.

Many children and their parents stopped by and took advantage of some fun Halloween festivities while making an appearance on live television.

Some children even brought their dogs on the show. Residents of the community were also welcome to call in with Halloween greetings.

“It was our first time stopping by and we live just down the street,” said parent Ricardo Rojas.

“They keep this low-key but they could involve more people and kids walking on the streets trick or treating,” he said.

“It was lots of fun and the jokes made me laugh,” said Victor Rojas, 9. Victor and his younger brother Marcus, 3, wore Spiderman outfits and had a good time with Billy Bob on the show.

There were about 15 people working the event. Students worked on carving pumpkins and making props for the set.

Shane Rodrigues, director and co-producer of the show, said that Don Pollock is the one with the ideas and skits.

Rodrigues was in charge of the staff and the set.

“Don is the one with the ideas and I execute them,” Rodrigues said.

A scenario of aliens attacking La Verne was a new addition to this year’s show. They made skits to scare La Verne into thinking there was an alien invasion, Rodrigues said.

Along with the trick or treaters and special sci-fi skits, this year’s broadcast featured live performances by unique artists.

Penelope Torribio, a puppeteer, and John York, a musician who has been on “Halloween Live” before, made special appearances.

“It was John’s second year performing for us and we said that John was Billy Bob’s cousin,” Rodrigues said.

It was Torribio’s first time on “Halloween Live” and she enjoyed it. She was invited on the show by Pollock and she brought along her puppet skeleton named “Bones” and her guitar. She wrote a song just for the show and made bones dance a little as well.

“I love Halloween and I have more than 550 puppets,” Torribio said.

Torribio has made most of her puppets and also teaches puppetry.

“I have worked with puppets for 12 years and I teach at risk children with my puppets,” she said.

“This is a fun community event that we learn from every year, this year we had a lot of kids from the street come in,” Rodrigues said.

April M. Rojo can be reached at arojo@ulv.edu.