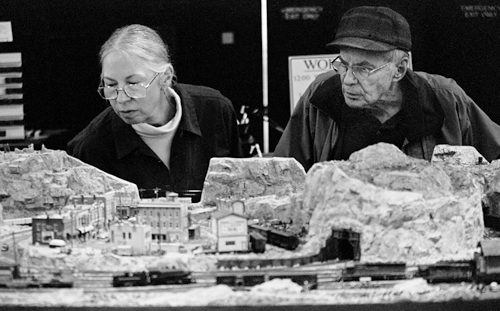 Kyra Compinsky and Warren Hanssler enjoyed their Sunday afternoon admiring a model of the Piute Flats Branch of the Denver and Rio Grande Western Railroad, created by David and Charlotte Hauver. The Great American Train Show, held at the Fairplex in Pomona, provided visitors access to vendors and working model train layouts. / photo by Veronica Garcia

Many visitors to the Great American Train Show have made collecting model trains a family hobby for generations.

Participants could purchase pieces for their train displays as well.

“The train models that are actually running are neat to look at, especially with all the small figures and trees,” said Anthony Montoya, first time attendee.

Also known as the largest touring model train show, the show visits more than 60 cities every year and has been around for 20 years.

“I have been buying and selling used trains for over 20 years,” vendor Richard Parshall said.

Parshall has worked on a railroad in his hometown of Erie River, Ohio, where four major railroads cross. Hundreds of townsmen, like Parshall, have made a living from working on the railroad, including his father who worked as a railroad conductor for more than 30 years.

Displays were geared toward younger audiences and also train the future enthusiasts.

Two displays drew the children’s attention. One had toy trains that the children could play with and the other sold different products of the cartoon character Thomas the Tank Engine. Thomas is a favorite for all children interested in trains. The products, to name a few, include hats, bed comforters, t-shirts and school supplies.

One of the workshops was a lesson on making scenery for model train displays. The products being used were from Bragdon Enterprises, which is best known for its geodesic foam, an easy to mold product for any background display.

Bragdon Enterprises’ products have not only been used for train scenery displays but also in movies such as “Star Wars,” which used Bragdon’s weathering powder supplies.

“Weathering is used to make things look old and grungy,” said Jenny Bragdon, who has been in the business for 20 years.

Doug Dykstra has invented a block detector that is used on train layouts to control the trains stopping and going. The blocks are used so the train on the following block will stop until the train in front exits the block it is in.

Dykstra worked on the detector for 10 years and his patent is still pending.

He also creates layouts for customers who would like to use the detector.

Displays range in size from those with trains as small as a finger to as large as 12 inches.

The show also included a booth of train art by John Winfield.

“The train show was a great success and we enjoy helping people interested in starting their own train model, “ Parshall said.

Next year’s schedule of shows is already available at www.gats.com and at most train show locations.

April M. Rojo can be reached at arojo@ulv.edu.