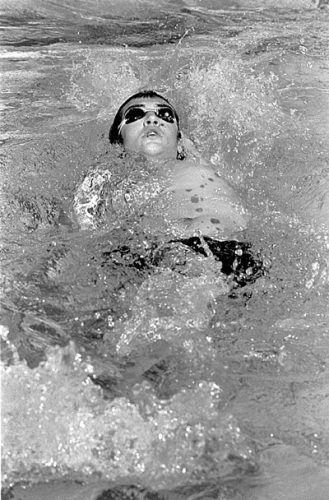 Freshman Matt Nasont swam the men’s 100-yard backstroke event during the Claremont-Mudd-Scripps Invitational Saturday. Nasont said, “Swimming is my sport, and as long as I’m here at ULV, I’ll be swimming.” / photo by Jenna Campbell

The University of La Verne men’s swim team placed sixth and the women finished 10th in the Claremont-Mudd-Scripps Winter Invitational on Dec. 3 and 4 in Claremont.

Both teams faced an aggressive day of competition as they swam against familiar schools in the Southern California Intercollegiate Athletic Conference including Claremont Mudd-Scripps, Occidental, Redlands and Pomona-Pitzer.

Backing up the strong placements from the men, the women’s team had scattered success throughout the invitational, placing 10th overall.

With the largest team in the University’s history of swimming, the Leopards could be seen in many events throughout the meet.

A strong and populated event for the Leopards was the 50-yard freestyle with 11 ULV women completing and finishing around and under the 30-second range.

Some highlighted events for the women came from sophomore Jessica Egbert, placing seventh and sophomore Lynea Loeffler placing 21st in the 100-yard backstroke.

The men and women’s team has a strong outlook for the upcoming season.

“I think we are going to go farther than we have in the past couple of years because we have bigger team,” junior Mary Manzo said. “We have a chance to be second or third in conference.”

“Everyone is here because they love it and they want to get better at it,” freshman Matthew Nasont said.

The women’s team shows strong potential with their large numbers and wide ranging depth of swimmers.

“We’ve almost doubled in numbers, and I think we will do really well this season,” Loeffler said.

With the large group of swimmers this season both the men and women’s teams show positive chemistry and the ability to have a good time with their sport.

“We have some really strong swimmers, and the team is a bunch of really great people having fun,” Nasont said. “We have really good chemistry, so everything is going great with us.”

“We have a really strong, gelled team this year,” head coach John Hallman said. “People get along really well and that is really encouraging and will help in January, because I’m going to draw upon teamwork.”

With the swimming team’s season still young, the group looks forward to improve and remain focused over the January break.

“A goal of mine is to have a solid January, with practices and meets, so that is what really will determine how we do in February during championships,” Hallman said.

Nicole Knight can be reached at stareknight17@charter.net. 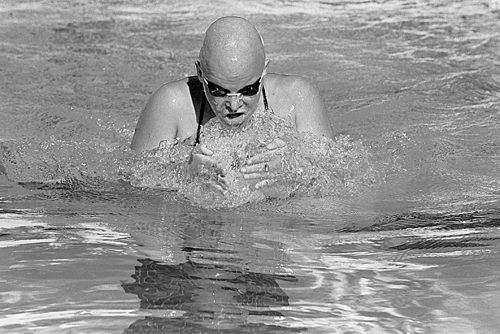 Mary Manzo swam her first event of the women’s 100-yard breaststroke during the CMS Invitational Saturday. Manzo has been swimming club teams since the age of 12. In her third year of swimming with the University of La Verne, Manzo looks forward to a promising season with her team. ULV continues action in a meet with Chapman and Biola tomorrow in La Verne. / photo by Jenna Campbell