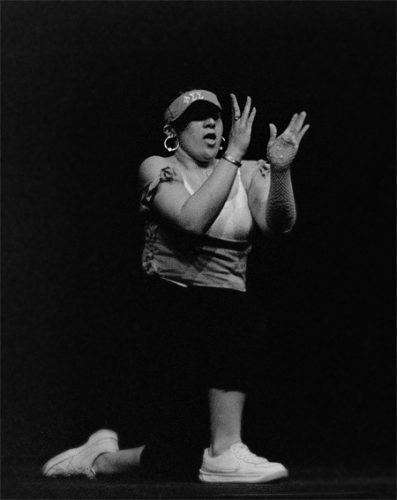 The event, named “Drop It Like It’s Hot!” after the hit Snoop Dogg song, showcased a number of talented performers from within the University of La Verne and the surrounding communities.

The evening kicked off a few minutes later than scheduled, with a thumping male versus female dance battle to the tune of “1, 2 Step” by the recording artist, Ciara, to fire up the sellout crowd.

This opening number was the highlight of the show, as far as show attendee, Cassy Armijo, was concerned.

“It was definitely worth the price of admission,” she said.

From there the hits kept coming one after the other, as emcees Brian Ortega and Jaclyn Urquidez introduced each of the immensely talented acts.

The team practices during first period and after school almost every day of the week, and it definitely showed.

ULV student Monique Chambers slowed things down a notch when she recited three creative and heartfelt poems of her own creation.

After her last piece, the emcees asked her how she got started writing poetry. Chambers replied that she started at age 13 as a way to escape from and vent aggression regarding a family crisis that was going on at the time.

The resulting instruction period only confirmed Ortega’s assertion that the men of Phi Delta Theta can not dance…period.

When the crowd returned, they were treated to the vocal styling of the University’s resident rap star, BMUSE, who also answers to Ben de Ayora. BMUSE’s work and sheer talent must be heard to be believed, and can be found on his Web site at www.myspace.com/bmuse.

Another ULV musician who wowed the crowd was Christy Roberts. The velvety-voiced, guitar-strumming singer/songwriter has a CD coming out in the spring, and judging by the reactions of the crowd, it should be a hot seller.

At the opposite end of the spectrum, Tanesha Atwell, Charlene Bolivar, Natalie Camacho and Jessica Cisneros turned the funk back up to 11 with their dance routine set to “King of the Dancehall.”

In addition to the aforementioned performances, student Cathleen Buttung danced the hula, and Urquidez joined Veronica Garcia for some Tahitian dancing. To close the show, all of the Phi Sig sisters present took to the stage and sang the show to a close.

“I was really happy with it,” said Dana Diaz, Phi Sig social chair and coordinator of the show. “And I’m hoping to expand it as the years go by.”

Diaz said she got the idea of holding a talent show at the beginning of this past summer.

“I just wanted to do something big,” she said.

The audience seemed to be equally pleased with the final product.

He added that all of the acts were impressive, but none more so than his fraternity brother’s rapping.

“He got the crowd going,” he said of BMUSE’s performance.