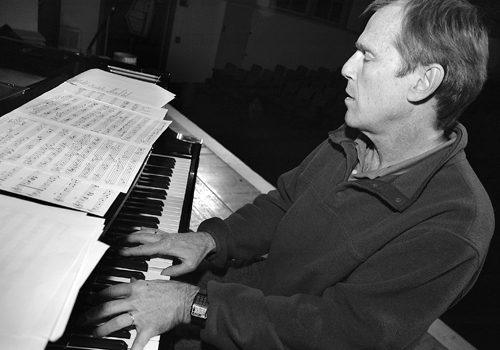 In warm-up before the show, professor of music Reed Gratz practiced with other members of the Reed Gratz Band before Friday’s performance in Founders Auditorium. He has been awarded a jazz composition grant from the NEA, an African-American music grant by the NEH, a Senior Fulbright Lecturship at the University of Innsbruck and the Excellence in Teaching Award at the University of La Verne for undergraduate faculty. / photo by Jenna Campbell

The Reed Gratz Band performed Friday night at the University of La Verne’s Founders Auditorium and proved that music has a language of its own.

Throughout the concert, Professor of Music and pianist Reed Gratz swayed as his fingers glided across the piano, bassist John Leftwich seemed to use his instrument as a dance partner, guitarist Michael O’Neill sat at the edge of his seat doing a Chuck Berry-like duck walk in his chair, and drummer Mike Bennett, lost in the music, hardly opened his eyes as he played.

Gratz said there was nothing better than playing with musicians who “get” one another.

“The whole idea of musically interacting with people who understand the same musical language is a fantastic experience, a feeling that nothing else can give you,” Gratz said.

Gratz also said his band had been through many reincarnations over the years, but he said the musical backgrounds of the current members gave a certain quality not only to their abilities as musicians, but to their personalities as well.

“These players are great, world-class players,” Gratz said. “They contribute, collectively and individually, years of hard work, in-depth study and musical understanding of many styles. They are also, maybe in part because of their musical experiences, great people.”

Gratz has played piano since age five, or about 50 years, and he has written music for 15 plays, and has taught at many universities including the University of Miami, Washington State University, and the Utrecht Conservatory in the Netherlands. He has also won several research grants and awards for his efforts, including a Senior Fulbright Lectureship at the University of Innsbruck and two Who’s Who Among American Teachers awards.

O’Neill has played with such artists as George Benson, Rickie Lee Jones, Max Bennett, Stevie Wonder and Natalie Cole, and has performed at various music festivals across the world.

Leftwich, a Los Angeles based musician and composer, has performed and recorded with names like Carmen McRae, Chet Baker, Sergio Mendez, Rickie Lee Jones and Lyle Lovett, and has also composed music for television and film.

And Bennett has worked with the likes of Max Bennett, the Ron Powell Band, Jonah Matranga and Tony Kaye.

Leftwich said he enjoyed playing with Gratz because he allowed musicians to cross the line between merely performing and actually getting lost in the music.

“You can let your imagination go,” Leftwich said. “It’s nice when you turn off your conscious mind and you just react.”

Bennett also said he had a lot of respect for Gratz, both as a composer and as a person.

“Reed plays with respect and maturity and his playing is extremely true to his character,” Bennett said. “Being able to play and study with Reed is worth its weight in gold.”

O’Neill summed up what he thought of Gratz, Bennett and Leftwich in one word: awesome.

The band performed a mixture of Gratz’s own compositions and some of his favorites, including “Stratusphunk” by innovative pianist George Russell, Gratz’s self-proclaimed musical father, to “Thieves in the Temple” by Prince, which Gratz claimed was the perfect song to end the concert.

The performance of “Tiny Capers,” a song composed by legendary trumpet player Clifford Brown, was a highlight of the night. Leftwich stopped plucking the strings of his bass with his fingers and pulled out his bow, making the instrument sing in its deep voice to an extended round of applause.

“It had a nice flow to it,” Leftwich said. “It’s playful and I like that kind of swing feel.”

“Yo Quiero El Pulpito,” a song Gratz wrote for his 2-year-old son Joachim, was another highlight, as its upbeat tempo and Latin undertones were complimented by Gratz’s heartfelt performance.

“It’s a combination of urban and Latin, and that resonated a lot with what I like to do stylistically,” O’Neill said.

O’Neill shone during his solo in the Mike Stern tune “After You,” as the sounds made by his guitar were comparable to the lengthy riffs made famous by legendary guitarists like Jimmy Page and Carlos Santana.

Bennett’s time in the spotlight came during George Russell’s “Stratusphunk.” He played an extended drum solo, and both the musicians on stage and the audience laughed in anticipation of where he would carry the beat next, as he went on and on, playing hard enough to break his bass drum pedal.

“Well Mike, if you played your drums right, they wouldn’t be breaking,” Gratz said to the audience, earning shouts of laughter. “I keep telling him that.”

Overall, the audience of around 100 people was thrilled by the musical efforts of the band.

Renee Soliz, a senior music major, recorded the concert but said she was also a sincere fan of Gratz’s and of jazz in general.

“I came to see him, because I love jazz and he’s a phenomenal jazz musician,” Soliz said.

“I love jazz, I grew up on jazz and Reed Gratz does it the best to me,” Conner said. “Plus, he’s a nice person and you have to support people like him.”

And Eva Hinojoza, a junior music major, singled out “After You” as her personal favorite song of the night.

“I loved the guitar feature, Michael O’Neill did a fantastic job on that,” Hinojoza said.

Expressions of bliss were on the band members’ faces throughout the concert and their energy peaked at its end with the performance of Prince’s “Thieves in the Temple,” which once again had O’Neill on his feet. All four instruments blended together but stood out at all the right moments to complete the “perfect ending” Gratz predicted when he introduced the song.

Bennett explained the band members’ continuous expressions of bliss by summarizing his own dedication to the music business.

Music “is inconsistent and has a million ups and downs, but I can’t walk away from it,” Bennett said. “Playing is when I feel at home.”

Gratz took this notion even further: “(It’s) a little like, I suppose, driving a great sports car on a winding road in Italy, except that if you make a mistake, nobody gets hurt.” 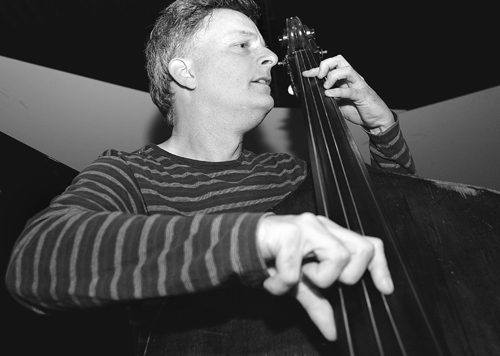 Bassist John Leftwich is a musician and composer who grew up in San Diego. He currently performs with a variety of bands, writes music for television and film, and produces records. Leftwich performed in the Reed Gratz Band, along with guitarist Michael O’Neill and drummer Mike Bennett. / photo by Jenna Campbell