By Adam Omernik, Campus Times Editorial Board on April 8, 2005 in Editorials, Opinions 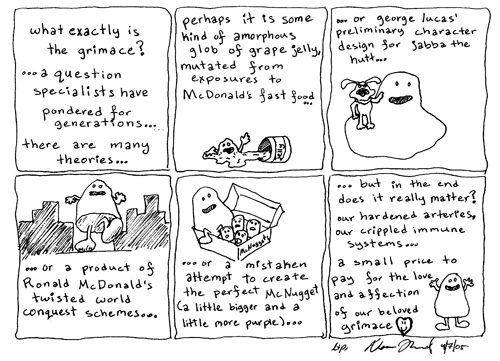 The horrific terror that millions of Americans have been dreading for the last few decades is now lurking just beyond the visible horizon like a disgruntled leviathan all hepped up on PCP.

No, democracy is not about to fall, the President is not being brought up on impeachment charges and Joan Rivers’ robotic endoskeleton hasn’t malfunctioned causing severe damage to her daughter’s plastic face.

The calamity of calamities is McDonald’s recent announcement that it plans to have all of its drive-thru orders placed through a central call center.

The execs at McDonald’s maintain that this central processing center will somehow make their operation more efficient, but this seems counterintuitive when one considers the fact that the employees who are actually in the store consistently fail to properly fulfill orders in the first place. Seriously, if Pimply McGoo can’t get the orders right when he is there in the building, how can he be expected to get them right from three states over?

What this really amounts to is just one more way for McDonald’s to increase their profit margin by reducing the amount of employees that they need to operate at each location. And while this is definitely a way to rake in some more dough, it seems like if they really wanted to increase profits, it would be more effective to offer better products and services.

Here is a short list of things that Ronald and his associated freak show (what the hell is Grimace anyway?) could do to make the customer experience better:

• Cut prices by using the grease from employees’ faces to cook french fries.

• Cut out the Happy Meal middleman and just give children an injection of beef tallow with their toy.

•Instead of toys with happy meals, give out free defibrillators complete with instructions.

• Change names on menu to actually reflect what the customer will receive. Chicken McNuggets could be called Meaty McProcessed-blobs.

• Reform the drink sizes which currently include Medium, Large and Lincoln Continental.

• Make a solid commitment to fighting the War on Terror by finally forcing the Hamburglar to stand trial for his numerous crimes.

• Buy two Big Macs and your liposuction is free.

Far and wide McDonald’s has become the American face of bad food. Comedians joke about it, parents realize it, and doctors, politicians and activists have decried it. Yet somehow McDonald’s intends to increase business by routing orders through a central processing center. Maybe it should just offer a better product.