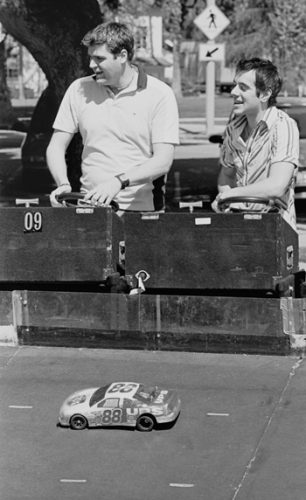 Nearly 500 people took their turn at the wheel of the mini NASCAR track during the April 5 Commuter Fair sponsored by the Campus Activities Board. Campus Activities Director Chip West, who saw the track at a National Association for Campus Activities conference, and senior Fadi Aboualta raced for the commuter-friendly prizes like car wax and squeegees. The company from Montana that provided the track said more people participated in the races at ULV than the prior day when the track was at Cal State Fullerton. / photo by Chrissy Zehrbach

NASCAR racing doesn’t typically consider the University of La Verne campus home. But when the track is only 26 feet long, and the cars can be controlled with a remote, ULV can tell its students to start their engines.

A mini-NASCAR racing track was the main attraction on April 5 when the Campus Activities Board and the Associated Students Federation Forum hosted Commuter Day.

In the morning, commuters were welcomed at the University’s parking lot with a free air freshener and doughnuts, but lunch time included the better part of the deal.

This they did, with events that centered on cars and racing as well as prizes that helped commuters pamper their cars.

Free lunch was offered to commuters in the Quad while KULV provided the music.

After lunch most people moved over to the NASCAR remote control racing.

“It was awesome,” said Lenny Moore, attendant to the event, despite the fact he didn’t win.

Most people seemed to enjoy the adrenaline rush of racing.

“I was having fun loosing,” said commuter Pamela Beas.

Others refused to give up that easily.

“With this stuff you can’t be conventional,” said Corey Hanson, freshman broadcasting major. “You have to play a little dirty.”

Winners received their choice between prizes like tire cleaners, sun screens and other products that helped with car maintenance.

The day also included the ULV tradition of having sandy candy. The clear plastic tubes with colorful, sweet and edible sand was given out to those who needed a little more sugar.

“Sandy candy is given at every fair,” said Daisy Aguiar, commercial services coordinator for the Office of Student Life.

This is just another way to help students at the University get ready to have fun.

Those who did not choose to participate in the racing opted for playing Twister with a chance to win KULV t-shirts or CDs.

ASF members took advantage of the opportunity to sign up people for the next event, “Mr. ULV” which will be taking place April 21.

Commuter Day ended at 3 p.m. when the race track was put away, and after a day of racing excitement students returned to their daily activities.

Relax, Mom is on the case
Death penalty focus in talk