By Jenna Campbell, Joseph Lovallo on April 15, 2005 in Softball, Sports 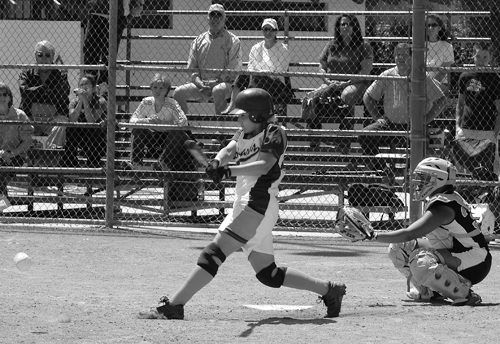 Jessica DeGiacomo of the University of La Verne got one base hit and one RBI, Saturday at Wheeler Park. The Leopards defeated the Tigers in the doubleheader, 4-1 and 7-3, making this their third victory over Occidental College this season. / photo by Jenna Campbell

The University of La Verne softball team swept Occidental this past weekend in three games. The Leopards outscored the Tigers by a total of 24-4 in the series.

The trio of victories improves La Verne’s record to 21-12 and 8-3, as the Leopards remain in third place in Southern California Intercollegiate Athletic Conference standings.

“This weekend we really had a total team effort,” head coach Robin Haaker said. “Lots of people got in the games to contribute and I was really impressed with how all of our pitchers performed.”

Leopard offense and defense combined for a 13-0 shutout on Friday in Los Angeles to open the series.

ULV was led by the pitching of Mary Olson, who only surrendered two hits in the shutout, accomplishing her sixth win this season.

The offense continued in the fourth inning as Kelly Silagyi hit a home run.

Debbie Bugarin’s double scored Riker, and after Bugarin scored on a throwing error, Jones doubled to knock in Guerra.

ULV stayed hot in the fifth as Guerra, Jones, Ashley Savage and Dana Grimley all had RBI singles.

Jones, who earned SCIAC athlete of the week honors for her efforts last week, finished with a 4-4 performance with two runs batted in. Silagyi also contributed a 4-for-4 effort, with one home run.

“We’ve been struggling as a team,” Silagyi said. “I did what I could to get the group going and we came ready to play.”

On Saturday the Leopards returned to Wheeler Park for a two-game set, taking game one by a score of 4-1.

ULV got off to a quick start in game one as Grimley singled to score Silagyi and Savage in the first.

Jones hit a home run in the third, and Guerra scored on a wild pitch in the sixth for the only other Leopard runs in the game. Guerra finished 2-for-3, and Savage contributed a 2-for-4 effort.

Pitching six innings, Kathleen Salvo was on point as she bettered her record to 4-1, allowing only four hits and one run for the Tigers.

According to Jones, the Leopards’ hard work has been paying off.

“We’ve been practicing hard.” Jones said. “These next three weeks are huge if we want to make it back to regionals. We’ve got to keep our intensity up because all of our games are big from here on out.”

Sloppy defense hurt the Leopards in the final game of the series as they committed five errors. Fortunately the team’s high-powered offense bailed it out and led them to a 7-3 win.

Riker’s singled scored Silagyi in the first, but the fifth inning was all the team needed to seal the series sweep.

With sparked RBIs from Silagyi, Riker and DeGiacomo, the Leopards would unload for six runs in the bottom of the fifth.

Karina Ortiz gave up only two hits as she picked up the victory, her third of the season.

Riker, Savage and Silagyi all finished with two hits, Riker tallied three RBIs in the game.

La Verne will have a chance to make up ground in the SCIAC standings as they take on second place Cal Lutheran this weekend in a three-game set.

“To beat Cal Lu we’re going to have to play our game, and maintain our intensity,” Haaker said. “Most importantly we need to focus on the things we do well.”

Currently third place in SCIAC, the Leopards will need to advance in the standings if they wish to reach the post season, making the series even more crucial.

“The team’s picked up momentum and gotten stronger as the season has gone on.” Silagyi said. “We have to finish in second place to even be considered for the regional playoffs, so these are must win games.”

Action begins today with a 3 p.m. match-up at Wheeler Park. The Leopards will then travel to Thousand Oaks tomorrow for a doubleheader beginning at noon.

Joseph Lovallo can be reached at lovalloj@ulv.edu.