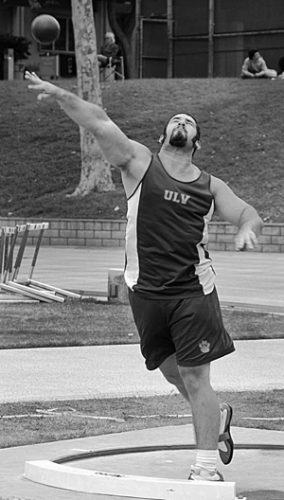 Dennis Parr finished sixth in SCIAC and threw a personal record of 138 feet in the discus. The women’s team placed first overall, while the men took fifth. / photo by Jenna Campbell

The men and women’s track and field teams took the Southern California Intercollegiate Athletic Conference by storm as the women took first place honors and the men took fifth last weekend at Pomona-Pitzer.

The women’s team dominated the field in all events, winning seven of their eight contests.

Other wins came from freshman Lauren Johnson who captured the 100-meter dash with a time of 12.25.

Pearson and Johnson teamed up with Krystle Luckey and Deonne McLean to capture the title in the 4×100-meter relay with a winning time of 48.03.

Veronica Andrews added her name to the win list, claiming two SCIAC titles in the javelin, throwing 131-0 and the high jump with a leap of 5-1.

In the distance events, Alexis Candelaria placed second in the 5,000-meters.

The men had a successful weekend despite falling short of the SCIAC title placing fifth with 55.33 points. 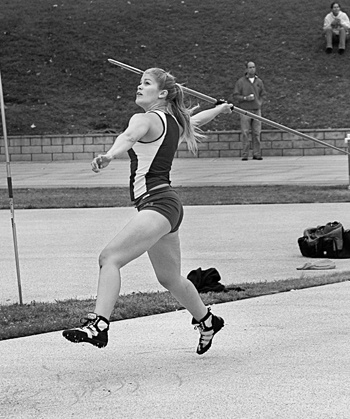 Veronica Andrews of the University of La Verne caught everyone by surprise as she won both the javelin (131 ft.) and high jump (5 ft.-1 in.) events during the SCIAC Championship held at Pomona-Pitzer Monday. / photo by Jenna Campbell

Other Leopards successes came from Phillip Craig placing fifth in the long jump and Dennis Parr placing sixth in the shot put.

The highlight came from senior Donte Witherspoon who won the SCIAC long jump (23-8 3/4) earning a NCAA qualifying mark and adding more than a foot to his lifetime best.

“I am happy that I achieved this mark,” Witherspoon said. “I hope to reach a higher mark so I may be placed higher in the NCAA.”

Witherspoon, who has also been named the SCIAC male athlete of the week, has also been ranked No. 2 nationally in the long jump and No. 5 in the triple jump.

“The meet was a good one. We competed hard and will keep having fun,” Craig said.

The team looks forward to their upcoming competitions beyond SCIAC.

“This is good for us,” Parr said. “We need to keep on doing this the best we can and we will be victorious.”

La Verne will now advance to the California/Nevada State Championships at noon on Sunday in Fresno.