By Jenna Campbell, Jessica Warden on May 13, 2005 in Community News, LV Life 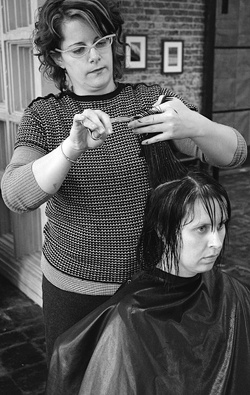 “It wasn’t a dream, it just happened,” said Cherie Savoie, about owning her own salon. Savoie’s loyal customers, like eight-year patron Kathryn Johnson, have followed the stylist to her new salon, which has been open for two months. “I’m glad I have my own creative space surrounded by creative people in the Pomona Arts Colony,” Savoie said. / photo by Jenna Campbell

Located on Third Street in the arts colony, the salon is a complementary addition to the area because of its urban-chic qualities.

Savoie chose Savoie as the name of her salon in honor of her grandparents.

She said it was her grandfather, an artist, and grandmother, who nurtured her creative side and emphasized the significance of art, culture and travel.

Architecturally, Savoie Complete Hair Solutions is one of a kind. The salon was designed and built by renowned set designer Tom Sanders. Savoie was introduced to Sanders by long time friend and client Janice Sanders.

Sanders is widely recognized for his work on such feature films as “Saving Private Ryan” and “Dracula.” Both films earned Sanders Academy Award nominations.

Although Sanders had his hands in much of the design efforts, it is the finishing touches implemented by Savoie that make the salon an extension of her own personal style.

“The vintage trend in home and garden décor has been popular and is growing stronger simply because of nostalgia,” says Richard McLean, co-owner of Futures Collide. “People clearly recognize that the lines and style of the mid-century era are purely good designs and it transcends so well into our contemporary lifestyle of today and no doubt for many years to come.”

Due to the salon’s designer roots and arts colony locale, it only makes sense for Savoie Complete Hair Solutions to participate in the Pomona Artwalk.

The Artwalk is a community event that takes place on the second Saturday of every month. Local merchants and gallery owners open their doors to the public and allow them to view artists’ works.

Savoie has several artist friends and feels the Artwalk would be a great opportunity to showcase their works and get the salon involved in the downtown Pomona community.

“I want to really try and get people to come to this area more and see the art here because I just think art is so important,” Savoie said.

In tomorrow’s Artwalk from 6 p.m to 9 p.m., Savoie will exhibit the works of painter Jeremy Szuder, painter Sergio Gutierrez and photographer Lee Tintary.

“I create images that express a state of uncertainty, images that suggest a world of familiarity uninhabited,” Tintary said. “I want my photographs to serve as tools that allow viewers to reconnect with their own memories, canvases upon which they can project their own experiences.”

With an architectural focus, Tintary has been practicing fine art photography for more than 10 years. His work has been exhibited in several Southern California galleries.

Savoie will also exhibit a painting done by her 12-year-old daughter Devin Snyder. The work is a painting of a church close to the area. Synder, who in the past attended a few art lessons at the dA Center, a local gallery, did the painting at only age seven, but demonstrates the artistic qualities found in an accomplished artist.

In addition to the Artwalk, Savoie is planning a hair show set for 8 p.m. on June 11 as a grand opening celebration for the salon.

Savoie has invited a few fellow hair stylists from other nearby salons to help her with the show.

“Hair shows are art. It’s a hairdresser’s art, and it’s something we don’t do everyday,” Savoie said. “The show will be totally creative and I want to use lots of funky colors.”

Savoie revealed that recently she has been taking inspiration from the colors of bird feathers, vibrant hues of reds, yellows and greens.

Savoie has been a hair stylist for 11 years but has shown an interest in hair her whole life. Savoie explained that as a child she became her family’s resident hair consultant. As a kid Savoie helped perm her mother’s hair and gave her father regular haircuts.

After graduating from Richards Beauty College in Ontario, Savoie began her career at Carlton Hair International where she worked for six years.

She then worked at Utopia, a salon in downtown Upland, for four years before opening Savoie.

Even with a full 11 years experience under her belt, Savoie still sees the importance of continuing her education and keeping up with the latest trends and techniques in the hair industry.

Therefore she continuously attends hair cutting and color courses, some of which are held at the Vidal Sassoon Academy in Los Angles, ARC Academy in San Diego and Modern Organic Products Academy in Chicago.

She has used MOP for six years now and recommends it because its organic qualities keep hair healthy and also many of their products contain anti-sulfate agents that prevent hair color from fading.

To make an appointment or find out more information about Savoie Complete Hair Solutions call (909) 865-6500.

Jessica Warden can be reached at jesselw@verizon.net.