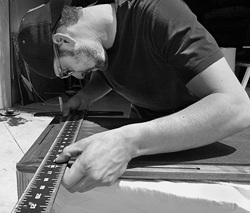 “It has to fit exactly perfect,” said Mike Manucelis as he backed his California black walnut and birdseye maple picture frame. Manucelis is a senior criminology major who spends his free time working in the theater department’s wood shop. / photo by Jenna Campbell

Pieces of wood litter the ground and sawdust flies through the air, blanketing the floor of the woodshop.

The buzz of a table saw and the muffled sounds of Ella Fitzgerald playing on a radio spill out onto the University of La Verne football field, while handmade picture frames soaking in their sixth coat of polish, bask in the sunlight just outside the Cabaret Theatre.

Minuselis, 27, spends four to five hours a week in the woodshop connected to the Cabaret Theater working on various pieces of handcrafted furniture, including picture frames that can take more than 32 hours to create. The four-to-five hours he can fit into his schedule are not enough for the dedicated Minuselis, who wishes he could devote more of his time to carpentry.

“If I had my way, I’d do it two to three hours a day,” Minuselis said.

His love for carpentry can be traced back to his childhood. Growing up in what he describes as an “old” family, Minuselis was introduced to carpentry at an early age. His family has been in the construction and engineering businesses for literally hundreds of years, he said.

“Like every other kid, I suppose, I picked up the hammer and the nails and I just went crazy,” he said.

Minuselis was born in Greece, but he and his family traveled to the United States for school and vacation on a regular basis.

Although he was introduced to the craft at an early age, his real passion for the art bloomed as a result of a woodshop class he took at Tallmidge High School in Tallmidge, Ohio.

During this course, Minuselis began construction on a desk for his parents.

Although it started as a final project, it took nearly a year to complete even after the class ended.

An estimated 1,500 hours later, the 400 lb. desk was finished and it stands today as one of Minuselis’ greatest accomplishments.

“It’s a point of joy to make something for someone that’s functional and beautiful. Providing something that they can’t buy elsewhere,” Minuselis said. “And of course the next question is, ‘How did you do that?’ It’s great when they ask that.”

After his high school graduation, Minuselis enrolled at the ULV Athens campus but in 2003 he decided to transfer to the central campus for its criminology courses. Although the criminology classes inspired his move, Minuselis does not intend to use his criminology degree after graduating this May.

“It’s a lot like carpentry. There’s not much money in criminology. You won’t become a millionaire doing either one,” Minuselis said.

Although Minuselis realizes that he probably will not make carpentry his career, he hopes to one day own his own shop where he can work with machinery that meets his standards.

The Cabaret Theater offers Minuselis a place to work and he is very grateful. However, the machinery is not up to par, the self-proclaimed perfectionist Minuselis said.

Always using a microscope and calling his toolbox “The home of the fountain of truth,” Minuselis pays close attention to every detail of each of his projects. Mistakes are not acceptable.

“The Cabaret doesn’t have machinery as accurate as I need it to be. If anyone has a nice shop that they are willing to donate, I’d be grateful,” Minuselis said jokingly.

Although the Cabaret machinery is a bit shaky, it seems to get the job done and allow Minuselis to continue his work, for the time being.

Aside from criminology and carpentry, Minuselis enjoys spending his time rock climbing, skeet shooting, hunting, swimming and being an all-around sportsman who is not afraid to give something a try.

Minuselis is also currently working for a developing company and plans to venture into real estate after graduation with his friend and ULV alumnus Daniel Tucciarone.

Tucciarone, who met Minuselis on the debate team, is slowly learning the craft and admires Minuselis’ dedication.

“It’s pretty commendable. He’s into this kind of art as an art major is into his,” Tucciarone said.

Minuselis, who is inspired by classic designs such as Sheridan, Chippendale and many British and French furniture companies, acknowledges that there is a degree of art in the actual design of the pieces he creates, but he stresses the importance of working with the right piece of wood foremost.

“I let the wood have the beauty. I let the wood do all the talking,” Minuselis said. “I still haven’t found the ability to make anything as beautiful as God can make it. And guess what: God makes trees.”

The majority of Minuselis’ creations are given as gifts to friends and relatives, but he has not shot down the idea of selling his creations, although he admits they would be costly taking supplies, hourly wages and personal customizations into consideration.

Valerie Rojas can be reached at skalivornia@hotmail.com.