By Adam Omernik, Campus Times Editorial Board on October 21, 2005 in Editorials, Opinions 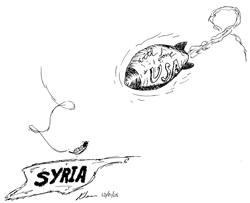 In the past few days Bush’s definition of the war on Iraq and terrorism has altered once again, this time to include Syria as the new potential target, due to clashes between our government and theirs. With this said, we might as well prepare ourselves for another set of program cuts and possibly even some unprecedented tax increases since cross-border military operations might become the new war front in Iraq.

Syria was revealed as a threat to the U.S. after a fire fight along the Iraqi border between Syrian and American troops in which several Syrians died. Consequently, Syria’s president, Bashar al-Assad, and his forces, set up a protest condemning the American government at the U.S. Embassy in Damascus.

For now, the U.S. government claims that it is not planning large scale military operations in Syria and has no intentions to topple and restructure its government, but only time can reveal the truth. U.S. troops are reported to have occasionally gone over the Syrian border in an attempt to cut the flow of incoming insurgents. Plans to send intelligence gathering teams into Syria are being considered as well.

With the increasing difficulty of pinpointing the real reasons of going to war with Iraq, our trust in the Bush administration is continuing to dwindle. First we were going to war because of an unsubstantianted connection between Bin Laden and Iraq; next it was to find weapons of mass destruction in Iraq; then the reasons shifted to include stopping Sadam Hussein from his terrorist acts, which has resulted with him being charged in a non-international court with killing 143 Iraqis and destroying some date palms, and over the summer we were presented with the most cyclical reason of all, to honor the fallen, a rational that kept Rome at war for centuries. Now retaliation and invasion of countries that have been labeled as a threat to our society are slowly making their way onto this laundry list of reasons for war.

When will this deceitfulness stop? Why is Bush giving his nation false pretenses in order to justify this war and hide his real intentions?

In a memo to British Prime Minister Tony Blair, Bush said that Iraq was merely the first pit stop that the U.S. is going to take in the war and expressed his intentions of targeting other countries such as Saudi Arabia, Iran, North Korea and Pakistan for acquiring weapons of mass destruction and becoming a potential threat. Unfortunately, we never heard of such plans until now.

Bush’s claims of the enemy being bigger has become tiresome. He always expressed his true intentions publicly after we have gone too far to pull out. Even though Bush’s reasons for attacking Syria are somewhat justifiable: To prevent radical Islamists from entering into Iraq and committing terrorists attacks, we wish we knew about these plans beforehand.

In some sense, the role of Syria can be related to the role that Cambodia played in the Vietnam War: A source of money, supplies and a sanctuary for insurgents.

This brings our country back to the same pot hole that we were stuck in during the Vietnam War, when secret wars with other countries kept us fighting long beyond what was needed. This fogged our original reasons of going to war.

Bush needs to step up and come clean before the American nation.