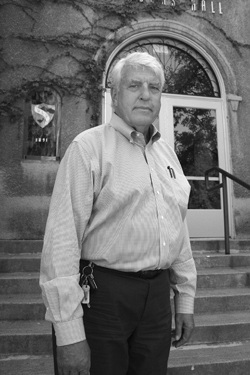 A new voice at the University of La Verne, Stephen Gothold began this fall as choir director. “I have always loved music, ever since I was a little boy,” Gothold said. Gothold has previously taught music at Whittier College, Scripps College and the University of Southern California. / photo by Kourtney Brumfield

With an impressive background in teaching music and chorale, 63-year-old Stephen Gothold is looking forward to a good year working at the University of La Verne as an associate professor of music and the new director of chorale activities.

“The chorale and I don’t know each other very well, but that will change quickly,” Gothold said.

Gothold is also currently the Director of Music Ministries at First United Methodist Church in Pasadena. He is also active in conducting productions for professional, regional and educational theaters.

To add to his directing experience, Gothold has served as the past president for the American Choral Directors Association.

Music has always been in his family. Both of Gothold’s parents were singers, and his aunt was an opera singer.

“My family and I would sing in the car and it was a natural thing to do,” Gothold said.

By the sixth grade, Gothold knew he wanted to be a singer.

“By the time I stopped being a cowboy, I knew I wanted to be a singer,” he said.

When Scott Farthing, former choir director at ULV, left the University in late spring of this year, the music department was in search of a new choir director. Through a few connections, Gothold was contacted for a possible position at ULV.

“I knew Kathleen Lamkin’s (professor of music at ULV) husband from Scripps College, and she told him of the situation and eventually asked me if I wanted to teach the choir group at ULV,” Gothold said.

Gothold does hope that the new students have fun and work hard in choir.

“I really like his style, it’s different from Farthing’s,” said Dana McJunkin, a senior liberal studies major. “He gives everyone a try and he meshes well with the rest of us.”

Even though the school year is just beginning, Gothold’s students already have positive thoughts about him.

“He is very contemporary and different,” said Jonathan Smith, a sophomore journalism major. “He brings out the best, even if you can’t sing.”

“There is definitely a new style of talent in this new generation of ULV students,” said Matthew White, a freshman public administration major. “He knows how to work with us to bring out our best.”

Gothold has a lot of ideas of what he wants to do with the new choir group.

“I hope to engage more students in music,” Gothold said. “I hope to give them lots of different musical experiences and make it more interesting.”

Theater Review: Fullerton’s ‘The Crucible’ is no hoax
Happenings