By Emmah Obradovich, Hugo Bryan Castillo on December 9, 2005 in News 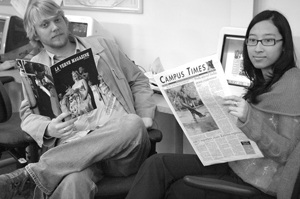 John Patrick and Nila Priyambodo have been named new editors in chief for La Verne Magazine and the Campus Times, respectively, for the spring semester 2006.

“It is very rewarding to come to a place as a transfer and achieve everything I have achieved,” said Patrick, a senior journalism major.

Before attending ULV, Patrick was a staff writer for the newspaper at Cerritos College.

“It was an OK publication,” he said.

During his first semester at the University he was an assistant editor for the Campus Times.

Subsequently he served as LV Life editor and editorial director.

“I never planned on being editor in chief (of the magazine),” Patrick said.

“I knew that if the opportunity presented itself, I would take it,” he added.

So when La Verne Magazine adviser and communications department chairman George Keeler offered him the position, he didn’t hesitate.

“I look forward to the new types of challenges that editing La Verne Magazine will present to me,” Patrick said.

Patrick hopes to uphold the tradition of the award-wining magazine.

“I am impressed with John Patrick,” Keeler said. “He is a top leader on campus, presently serving as president of the ULV chapter of the Society of Professional Journalists.

“John knows that it takes good planning … and a positive presence to lead and carry out an assignment,” he added.

Priyambodo, who will head the Campus Times likewise brings strong skills and experience.

She has served as an assistant editor, news editor and managing editor for the newspaper.

“I look forward to working with the staff and editors to publish a spectacular issue every week,” said Priyambodo, a senior journalism major.

She added that she’s a little nervous going in as her predecessors have set the bar high.

“Campus Times is an award-winning publication and I want to meet their standards,” she said.

The publication’s adviser and associate professor of journalism Elizabeth Zwerling is confident of Priyambodo’s readiness to take the helm.

“Nila has been consistent and hardworking,” Zwerling said. “She has the respect of her peers, and she is a good journalist with the variety of skills needed for this challenging job.

“She has the writing and editing skills,” she added. “She’s also a people person and a good manager.”

A scheduling problem almost led Priyambodo to turn down the prestigious post.

But Zwerling said she is glad everything worked out.

“Our goal is to make the paper better every semester,” Zwerling said. “There is always room for growth and improvement. We have a strong editorial staff.”