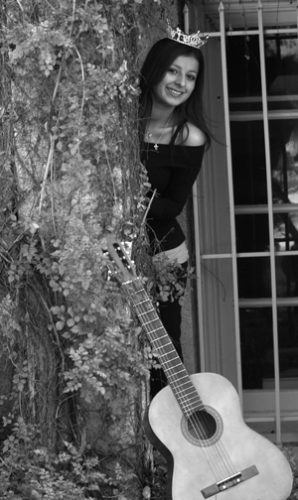 Amid an atmosphere reminiscent of Las Vegas casino nights – complete with playing cards, dice and Elvis Presley and Frank Sinatra tunes – Sandy Fernandez, a senior business major at the University of La Verne, was awarded Miss Congeniality and then crowned Miss La Verne 2006 to her speechless surprise on Feb. 11 in Founders Auditorium.

Fernandez smiled widely; mouthing “thank you” to her fellow contestants onstage as she graciously accepted the first award. She then stood still with her hands clasped to her mouth for several long seconds, making a conscious effort to come to terms with the second honor, before moving forward and kneeling patiently while Miss La Verne 2005 Jennifer Barlow pinned a sparkling tiara onto her head.

“The most challenging aspect of the pageant would have to be the fact that only one girl can take the crown,” Fernandez said. “Every single girl who competed worked as hard as the next, and in the end every girl that participates should go home feeling like a winner because it takes a lot to compete for Miss La Verne.”

Throughout the “Lucky Ladies”-themed night, Fernandez charmed the audience and certainly won the hearts of the judges. Dana El-Mahmoud, executive director of the Miss La Verne committee, said this was typical “Sandy” behavior.

“Sandy is dedicated to everything she does,” El-Mahmoud said. “She started competing for Miss La Verne in 2004 and stuck to it until she won. Over the past few years, I have been able to see her grow in so many ways; she is well-spoken, smart, beautiful and talented.”

All five contestants – Christina Boland, a senior liberal studies major at ULV; Asia Martija and Olivia Sibert, both seniors at Bonita High School; Sarah Seiverling, first runner-up and a recent ULV graduate; and Fernandez – worked extremely hard in preparation for the pageant and received $100 scholarships for their efforts.

In addition, Fernandez also won an extra $1,150 in scholarship funds, while Seiverling received an extra $200.

Only residents of and/or full time students in La Verne qualified for the pageant, which began with an orientation and proceeded with two months of rehearsals, practice interview sessions and walking practices. On the final day of the pageant, contestants were each judged on the basis of a 15-minute solo interview, an on-stage question and casual wear, and physical fitness, talent and evening wear competitions.

“I have been involved in a youth group since I was 11 years old,” Fernandez said. “I always felt blessed to be a part of that youth group. I believe that there is no one better to help the youth than the youth itself.”

Barlow and Mayor Jon Blickenstaff co-emceed the event. It was Barlow’s chance to give thanks and bid a fond farewell to her yearlong stint as Miss La Verne; a touching moment as a recorded message played over the loud speakers, and she hugged and accepted flowers from the potential queens-to-be.

After displaying their personalities through the casual wear competition, in which each contestant wore an outfit of her own choosing, the women were asked to think on their feet, answering questions that concerned everything from important principles and future worries to community contributions.

Fernandez relied on humor, allowing her personality to shine through.

“Can I take a life-line?” she asked Blickenstaff before pulling her question out of a bowl and sharing that she had contributed to her community through senior citizen, youth and homeless services.

The talent portion of the competition set the contestants apart, making each woman’s strengths painstakingly clear.

Fernandez demonstrated her love of Latin music by singing and playing the guitar to a ranchera piece while Boland sang a rendition of “Popular” from the Broadway musical “Wicked.”

Not to be outdone, Sibert performed a jazz/hip-hop routine to a “Snow White” theme, Seiverling sang Marilyn Monroe’s “Diamonds Are a Girl’s Best Friend” and Martija sang a soulful rendition of Billie Holiday’s “Summertime.”

The lucky ladies of the pageant were a family in and of itself, all extremely grateful for the opportunity to form lasting friendships, grow as individuals, gain enhanced speaking skills and real world experience, and emerge with easily exuded auras of confidence.

“I had never participated in (a pageant) and it’s something to tell your grandkids about, but the biggest thing that it helped me with was speaking,” Seiverling said. “It constantly kept me thinking about current events.”

Fernandez said participating in the pageant allowed her to express her pride in her Mexican heritage.

“I always wanted to win a beauty pageant and it was an opportunity to show who I am,” Fernandez said. “I am very proud to be Mexican and to stay true to my roots.”

In June, Fernandez will head to Fresno to participate in the Miss California Pageant as a representative of La Verne.

She said she was anxious to begin her year as reigning queen and to continue pursuing her goal of becoming a strong and driven woman.

“I am looking forward to representing a great city such as La Verne,” Fernandez said. “I am also looking forward to working with the Chamber of Commerce and getting more involved in the community, but most of all I look forward to leaving my example behind: of never being afraid to show your true self.”