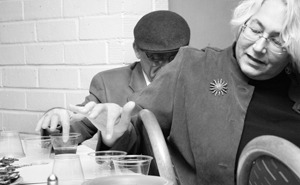 University of La Verne students and staff from different religious backgrounds participated in the Model Seder, a Jewish tradition, Wednesday in the West Dining Room. Associate Professor of Health Service Management Harriet Aronow and her husband Fred dipped their index finger in grape juice and placed ten drops into an empty cup, each drop representing a plague. / photo by Sergio Sandoval

Jewish tradition came to the University of La Verne when roughly 20 students, faculty and staff gathered for a model Passover Seder Wednesday.

The Seder is a dinner and ceremony to commemorate Passover, the Jewish exodus from Egypt.

The eight-day holiday this year begins on April 12.

“The theology behind the Seder is liberation,” said Leslie Bergson, rabbi for the Claremont Colleges, who led the service.

The celebration includes a retelling of the Jewish exodus, as well as a meal.

Several people are asked to participate in the readings.

The celebration begins with the lighting of a candle. A sprig of parsley – to symbolize springtime – is dipped into salt water, which symbolize the tears of the Jews who were enslaved.

Readings continued with explanations on how the Jews were liberated – and how they should keep fighting everyday to be free.

“If there is anything that you would like to know or confuses you, let us know,” Bergson told the participants, many of whom had never attended a Seder before.

Jews and non-Jews alike had the opportunity to ask questions and learn about the tradition.

The celebration continued with a symbolical expulsion of the plagues, for which everyone dipped their fingers into their glasses of wine and reduced their cup by 10 drops to symbolize the 10 plagues.

The meal took place near the end of the event.

The Seder meal consists of a number of elements including matzah, or unleavened bread, to symbolize the fact that when the Jews had to flee from Egypt they didn’t have time to let their bread rise; bitter herbs symbolize that the Egyptians made the lives of the enslaved people bitter.

There was also the unusual addition of an orange to the traditional Seder plate.

Bergson explained that this symbol was added after a rabbi in Florida expressed his disapproval of women rabbis.

He said that a woman belongs to a pulpit, as much as an orange belongs on a Seder plate.

Since then the tradition of adding an orange to a Seder plate has become widespread.

The celebration ended after dinner and closed with a blessing after the meal and a song.

“It’s wonderful to be a part of a tradition that has gone on for almost 5,000 years,” Aronow said.

The model Seder, held before the holiday, has become a ULV tradition.

It was started almost 15 years ago by Rhoda Kachuck, a now-retired English professor. When she left the University, Professor of Communications Donald Pollock took over its coordination.

“These are messages anyone can relate to,” Pollock said. “It’s a holiday full of symbols.”

“I’d heard some stuff about it,” said Joyce Deleon, sophomore biology major. “It’s nice to see it all come together.”