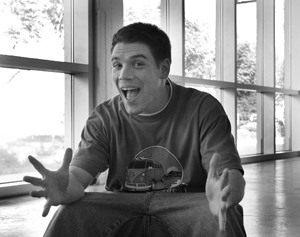 Yesel “Yak” Manrique performed his comedy act on March 13 at the Ice House in Pasadena. He was excited, nervous and breathing heavily before taking the stage. Yak was second to last, so he had to sit and wait, which was the hardest part for him. “As soon as I grabbed the mic it was all good,” Manrique said. He will perform in front of a ULV crowd at 10 p.m. March 30 in Founders Auditorium as the opening act for comedian Megan Mooney. / photo by Lindsey Gooding

As it arrives promptly at 10:50 a.m., he purposely takes a seat near a window in the center of the bus to avoid missing his stop.

Manrique sits among an eclectic mix – what he describes as “the crazy people and the people who go to church on Sundays” – where he talks to himself out loud as he receives puzzled stares from fellow riders.

Insane? No. A comedian in the making? Yes.

The two-hour journey to Pasadena is a weekly ritual for Manrique, where he travels to the Ice House to hone his comedic craft.

Manrique, a 23-year-old University of La Verne senior broadcast television major, has participated in the iconic comedy club’s eight-week course for up-and-coming comics, where he is one of the youngest in a group of mainly 30-year-olds.

The course teaches its pupils how to make a name for themselves, which includes getting an agent, marketing themselves and creating a comedy club persona. Participants also practice their stand-up routines and receive helpful critiques.

One of the first pieces of advice Manrique learned was that “timing is everything.”

A nervous Manrique remembered speeding through his first stand-up routine in front of the class.

“I was told to act like I was on weed rather than cocaine,” Manrique said.

“It’s a different world on the wood floor,” he added. “The lights are so bright, all you see are necks and little candles. One second up there feels like one hour.”

Manrique later showcased his skills during an open-mic night at a coffee shop in San Dimas.

However, he was surprised not to find his typical college crowd, but rather “65-year-olds with oxygen tanks.”

“These people can’t even hear me,” Manrique said. “But I actually got laughs.”

Manrique has since adjusted to those lights, flickering candles, silhouettes and crowds of all ages. On March 13, he was one of 23 comics who performed routines at the Ice House.

“I respect him and I’m not just saying that because he’s my friend,” said Louie Arreola, his good friend and senior project partner. “What he’s doing is really cool. I can see him doing that in the future. He’s good at it.”

He first heard about the workshop through Professor of Communications Mike Laponis, who Manrique calls his “No. 1 fan.”

“He has a lot of fans,” said Laponis, who has had Manrique in three of his classes. “He has a good sense of humor that shows through.

“He’s a good student too. He’s focused,” he added. “This discipline is what he wants to do. He gets what he can out of his education. Of course we always appreciate that as faculty.”

Ever since Manrique was a 4-year-old growing up in Van Nuys, he sensed his comedic destiny.

Manrique was inspired after watching Eddie Murphy’s “Delirious” as a young boy at his cousin’s house, and he continues to watch it every other week.

Growing up in a single-parent home with a working mother, Manrique turned to his favorite comedians and television programs.

“I learned how to shave from Bill Cosby and to tie my shoes from Mr. Rogers,” Manrique said.

“I’m in love with Tina Fey for no reason,” he said. “I respect people that brighten someone’s day by making people laugh.”

However Manrique wasn’t always the class clown. While attending Birmingham High School in Van Nuys, Manrique recalls being a shy running back/reciever rather than a loud-mouthed comedian.

“I dreamt, slept and ate football back then,” he said.

It wasn’t until a girl brought on the change and told him to break out of his reserved shell.

His football obsession led to success at Los Angeles Pierce College, where he was all conference running back/receiver in the division. He then heard about ULV from a friend and decided to tour the campus.

Though he ultimately decided not to play football, he found a new passion in the Arts and Communications Building.

At his new school, Manrique found a familiar face: Arreola.

The duo teamed up in fall 2005 to create “Eh-Day,” their own 30-minute sketch comedy show complete with commercials, which they are producing, writing and hosting.

“Senior year is hard, but we’re enjoying every second,” Arreola said. “Whenever we’re shooting, we are having so much fun that it takes longer than what we thought.

“We’re laughing and joking around,” he added.

“The comedy is off the wall,” Manrique said.

Manrique has made a name for himself on the University campus, where he was asked by the Campus Activity Board to open for comedian Megan Mooney at 10 p.m. March 30 in Founders Auditorium.

“He’s a funny guy in general,” said Campus Activity Board Comedy Committee Chair Nick Solis, who has had some classes with Manrique before and pledged Iota Man with him. “It’s good to see a student open up for a professional comedian.”

However a humble Manrique admits that though he is excited, he is also nervous.

Family, friends and his own experiences play a major role in developing his comedic routine.

He follows the philosophy that the best material comes from everyday, relatable instances.

“I don’t think it’s original unless it’s written on your own,” he said.

His family not only provides Manrique with a comedic routine, but also provides inspiration and drive to succeed.

During the first semester of his junior year in high school, his mother died.

Though five years have since passed, Manrique still turns to his mom for support.

“The only reason I am where I am today is because of my momma,” he said. “She used to work 14-hour days, seven days a week; sometimes graveyard shifts, but always made sure I had what I needed.

“She still looks over my little shoulders and she’s my inspiration in life,” he added. “She’s my hero, my role model, my momma. I miss her, but if I’m doing well, it’s because of her.”

Manrique hopes to not only continue his comedy, but parlay it into a screenwriting career as well.

He wants to attend graduate school at Chapman University to receive his master’s in screenwriting and ultimately create his own show.

Although he has garnered much success throughout his collegiate years, Manrique remains modest and recognizes he still has a long way to go.

“I don’t consider myself a comedian yet,” Manrique said.

When asked where he sees himself in 10 years, he jokingly replied “hopefully taller.”

Tracy Spicer can be reached at tspicer@ulv.edu.